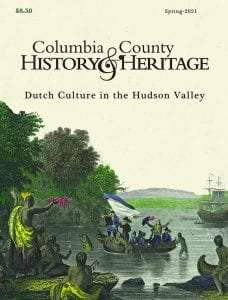 The issue includes a feature article by Russell Shorto, author of several national bestsellers, including The Island at the Center of the World, which told the story of the Dutch founding of New Netherland in the 17th century. In his article, “Who Was ‘Dutch’ in the Hudson Valley?,” Shorto explores the legacy of tolerance the Dutch bestowed on New York, while also examining the social hierarchies that existed within the colony.

Other topics explored in the issue include: The Hudson Valley’s link to the writings of Washington Irving; the Dutch influence on vernacular architecture in the Hudson Valley; Delft tiles in Columbia County; the Dutch love of the black locust tree; a brief biography of Martin Van Buren; and the Dutch origins of Hudson, among other articles.

The magazine is now available for purchase through the Columbia County Historical Society’s online store.

Read more about the Dutch experience in New Netherland here.