Together with the newly formed Friends of the Essex Fairgrounds, local friends and preservationists, farmers, and other stakeholders, Adirondack Architectural Heritage (AARCH) is vigorously opposing the destruction of this storied piece of Westport’s heritage, calling it one of the more important and defining structures that make up the Essex County Fairgrounds.

Advocates says the plan would destroy a prominent, character-defining, National Register-listed building and replace it with a new smaller building that will be more expensive to build than the cost of rehabilitating the existing building that would not add to the character or attractiveness of the Fairgrounds.

The county has used a figure of a $2.3 million rehabilitation cost to justify the demolition of the building. However, a coalition of architects, preservationists, local representatives, and contractors say the building is structurally sound and the rehabilitation of the entire building would require less than $1.5 million by eliminating unnecessary project components and modifying the approach to its renovation.

“At $255/square foot, this compares very favorably to a typical $370/square foot cost for new public construction projects,” a announcement sent to the press by historic preservation advocates said. “Renovation, therefore, is the most cost-effective and greenest option, providing more space for less cost, removing the carbon and landfill waste created by both demolition and new construction, and offering a more community-centered, heritage-rich space for Westport and Essex County youth.” 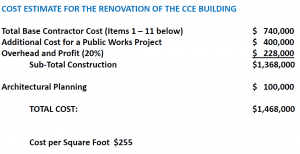 “Renovation of the entire CCE building will help restore the Fairgrounds as the center of agricultural activity for Essex County,  the announcement said.  “Preserving the structure would also help celebrate and highlight the Essex County Fairground’s biggest asset – the beauty and picturesque character of its rare, iconic late 19th and early 20th century buildings.”

They say the County plan to secure federal earmark funding for a new building should be used to renovate the existing building, which they say would be a better use of the money. 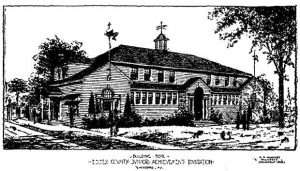 Historically known as the Westport Junior Achievement building, the Colonial Revival agricultural building was paid for by Ticonderoga native, farmer, and philanthropist Horace A. Moses, and designed by noted Adirondack architect Max Westhoff in 1923, and completed by workers in August 1924.

Advocates have started a petition to support the building’s rehabilitation. For more on the building’s history, and a more detailed explanation of the collation’s goals for saving this building, visit AARCH’s website.

Letters of support support for the preservation of the building can be directed to the Essex County Board of Supervisors: