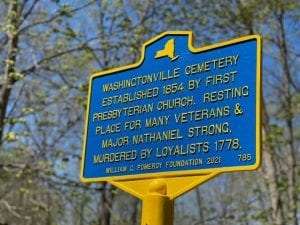 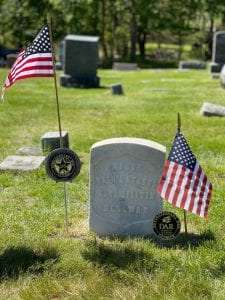 The fertile land around Washingtonville drew many families to the area in the 18th century. These early settlers were entrepreneurs establishing mills, shops, and businesses that would meet the needs of a growing farm community. These settlers, including the Woodhulls, Strongs, Moffats, Jaques, Brewsters, and Dennistons, became prominent in Orange County and they helped shape the communities around them. The Washingtonville Cemetery is the final resting place for many members of these early, influential families.

The Washingtonville Cemetery is located in the middle of the Village of Washingtonville. In 1854, the First Presbyterian Church upon buying a manse on North Street reserved an initial 5 to 6 acres for a cemetery. The elders recognized the need for a community burying ground. In 1864 and 1935 additional acres were acquired. The all-faiths cemetery continues, to this day, to be an active cemetery serving the community.

Jill Moore is a professional genealogist, the registrar for the Quassiack Chapter NSDAR, and a member of the Washingtonville Cemetery Committee. She is a second cousin to Major Nathaniel Strong and provided the research documentation for the grant application honoring the cemetery and the major’s death.

The cemetery committee, including Village Historian Linda Standish, unveiled and dedicated the new marker in a  ceremony on a recent Saturday. In conjunction with the unveiling, members of the Quassaick Chapter, NSDAR, and members of the Columbia Mid-Hudson Valley Chapter, Sons of the American Revolution, marked Major Nathaniel Strong’s grave and placed a wreath in a small graveside ceremony; Major Strong was killed in 1778 by Claudius Smith and his outlaws. Honors were provided by members of various Civil War reenactment groups. Assemblyman Colin Schmitt was in attendance as were the board members of Blooming Grove and Washingtonville. Senator James Skoufis and Orange County Executive Steven Neuhaus sent warm regards and certificates of recognition that were read aloud to the crowd.

The new roadside marker was funded by the Pomeroy Foundation, a private, grant-making foundation based in Syracuse which helps people to celebrate their community’s history through a variety of roadside marker grant programs, including its New York State Historic Roadside Marker Grant Program.