Between the more formidable island of Papscanee (previously spelled Papsickene, now a peninsula nature preserve) and where the Hoosac River meets the Hudson, more than a dozen streams flow into the Hudson River. Only at the Poesten Kill, which flows through Troy, was there enough farmland, room to grow, and sufficient water-power for the earliest industries.

An early outlying farm across the Hudson River from Fort Orange was built by 1632 on the south side of Mill Creek at de Laetsburgh, later known as t’greynen bosch (Greenbush, the pine woods) and now within the Rensselaer city limits. Like the Poesten Kill it also had mills, homes, a brewery and tavern, and even a Dutch Reformed church and parsonage. A ferry was established there and later colonial soldiers were often mustered under the protective eye of the fort across the river. The ferry continued to be controlled by the Van Rensselaer family until the nineteenth century providing easy and regular transportation between the Greenbush and Albany.

South of Fort Orange, on the Hudson’s west side, flooding and terrain restricted development of farms and the Normanskill was insufficient as a source of power.

Four miles north of Fort Orange on the Hudson’s west side the Patroon established a farm once called de Vlackte (the Flatts, home of the Patroon’s agent Arent van Curler), later known as West Troy and today Watervliet. The farm was considerably closer to the fort than those on the Poesten Kill and much more connected to life there, but lacked water power. 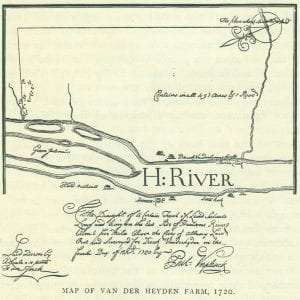 Farmer-trader-craftsmen dominated the people who settled along the Poesten Kill, and later, the poorer soils and cooler climate on the plateau above. After 1640 the company monopoly on the fur trade was reduced and settlers were allowed to participate provided they gave about half their profits to the Patroon. The settlement and trade increased so by 1641 the patroon thought it necessary to authorize his officers to take action against farmers who were hiring carpenters and other craftsman who were not the estate’s employees. By then the lines were blurred between tenet farmer, trader, and the increasing number of craftspeople setting up outside Fort Orange.

By the time of the English takeover of New Netherland Sweer Theunissen van Velson was in a sense an absentee landlord of the Poesten Bowery (farm) which then included both sides of the Poesten Kill south to the Wynants Kill; it ranged from the Poesten Mill near the base of the plateau on the bowery’s east side (today, Hill Street) to the Hudson River. Van Velson secured his leased rights by getting a patent from Richard Nicolls, the English Governor of the Province of New York. About the same time, van Velson leased the section to the south of the Poesten Kill, known then as Lubberde’s landt, from Johanna de Laet Ebbingh. She was Johan de Laet’s daughter, who had inherited a tenth of the Rensselaerswyck estate – “excepting the lord’s right” – in 1674 and only recently married Jeronimus Ebbingh.

In 1707 the Van Woggelum bowery was conveyed to Dirck Van der Heyden, who was then taking over the best lands along the Hudson (he bought Schuyler’s farm in 1720). Van der Heyden speculated on land leases throughout the area, notably in 1717 when he pulled from the hat of Albany’s mayor one of eight farms that were leased at Schaghticoke. Before it took the name Troy, the community along the Poesten Kill bottom lands was known as Vanderheyden and stretched from the Poesten Kill north to the Piscawan Kill.

The Van der Heyden family in Rensselaerswyck was born of the marriage of Jacob Tyssen and Anna Hals who settled in Beverwyck outside the walls of the Fort Orange, while the community was still in Dutch hands. Their son was Dirck Van der Heyden.

The land from Division Street to Grand, known to history as the “middle farm,” was held by Jacob D. Van der Heyden. Jacob D. lived in a wooden house at the southeast corner of Ferry and River streets (at what is now a Russell Sage dorm). Later, he built a new brick mansion at southwest corner of Grand Division Street (now Grand Street) and Eighth Street; it was destroyed by the great fire of May 10, 1862.

From Grand Division to the Piscawan Kill was the “upper farm” owned by Jacob I. Van der Heyden. His farm house, a small brick building built in 1756, stood at what would now be 548 River Street, north of Hoosick Street on the east side at what is now Vanderhyden Street. It was latter connected to the Seton Day Home and in the 1970s was torn down – it’s now paved over and the only part of a hand wrought iron fence stands on River Street.

Illustrations, from above: Map of the Hudson River Valley c 1635; and Map of Van Der Heyden Farm 1720.