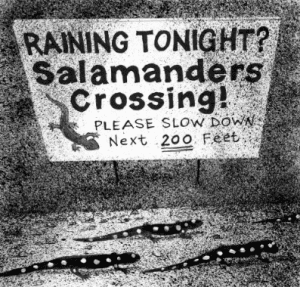 There’s a myth environmental educators like to tell, and it goes something like this: after every long northern winter, spring returns. Days lengthen, temperatures rise, the snowpack slowly disappears, and one afternoon, it begins to rain – a soaking, 45-degree rain that continues well into the night.

On that one big night, all of the wood frogs and salamanders and spring peepers clamber out of their winter burrows and migrate – up to a quarter-mile, on tiny feet – to their breeding pools. An explosion of life, all on that one big night. We call this myth: Big Night.

In reality, most years, our region experiences several Big Nights, one or two Medium Nights, and sometimes a smattering of Small Nights. It all depends on the weather.

However, the magic in the myth – that staggering vision of tens of thousands of amphibians marching across the early spring landscape, their urgency eclipsing even their need to eat – is every bit real.

Salamanders, wood frogs, and their kin exhibit what biologists call “site fidelity,” which is to say that they return to the same vernal pool, year after year, to breed. In many cases, it’s the very pool where they were born. These days, this often means crossing roads.

In Canada, biologists surveying a two-mile stretch of road over four years recorded more than 30,000 dead amphibians. Researchers in western Massachusetts found that roadkill rates on rural roads were high enough to lead to localized extinction of spotted salamanders in as few as 25 years. Multiple studies have found that amphibians and reptiles comprise more than 90% of all vertebrate roadkill. In short: if you’re a salamander, roads present a grave danger.

Enter the Salamander Crossing Brigades, heroic volunteers who carry migrating amphibians across roads by hand, keeping count as they go. 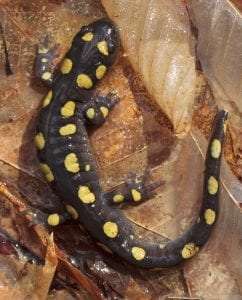 For the last ten years, I’ve coordinated a growing Crossing Brigade effort in the Monadnock Region of southwestern New Hampshire – complete with data forms, volunteer trainings, Salamander Crossing signs, frequent admonitions to never ever ever go out on roads at night without wearing a reflective vest, and even a five-day salamander forecast. (Because spring weather conditions change approximately every fifteen minutes in New England, migrations are nearly impossible to predict more than a few days out.)

My family and friends have finally stopped rolling their eyes when I tell them that my RSVPs to evening events in April are “salamander-permitting.”

Since 2007, our program has trained more than 900 Crossing Brigade volunteers, many of whom return, like the salamanders, year after year. Collectively, we’ve spared more than 35,000 amphibians from the crush of the tire. Add these to the counts from other Crossing Brigade programs in Maine, Vermont, New Jersey, New York, and Pennsylvania, and that number could easily top 100,000.

Still, we can’t carry every frog across every road. How many are crushed after volunteers have headed home for the night? How many more at sites where there are no volunteers?

The true conservation power of the Crossing Brigades lies not in hand-carrying animals, but in their potential to inform longer-term solutions. In Monkton, Vermont, ten years of amphibian crossing data recently led to the installation of Vermont’s very first salamander tunnels, which now guide migrating amphibians under the road and away from the threat of passing vehicles.

Keene, New Hampshire is one of only a few communities to close an amphibian road crossing site to vehicle traffic on Big Nights – a decision based in large part on data collected by, and a strong show of support from, the Salamander Brigades.

There is strength, too, in the transformative power of holding a spotted salamander in your hands for the very first time – its goldenrod-yellow spots aglow in the light of your headlamp, its tiny smile melting your winter-weary heart – and knowing that you’re making a difference in that animal’s life. That’s the kind of experience that sticks with you long after you’ve hung up your raincoat.

A few years ago, wet and tired after a long night on the salamander beat, I sent a bleary-eyed message of gratitude to my Crossing Brigade crew. The next morning, I awoke to this note from a longtime volunteer:

“[Your message] got to the heart of why we keep doing field work in sometimes miserable conditions: it’s important for the earth; it feels really good to be doing something positive; and it’s a hoot to know there are other slimy-fingered loonies out there in the middle of the night sharing the thrills and the heartaches.”

Brett Amy Thelen is Science Director at the Harris Center for Conservation Education in Hancock, New Hampshire. The illustration for this column was drawn by Adelaide Tyrol, photo of spotted salamander courtesy K.P. McFarland, vtecostudies.org. The Outside Story is assigned and edited by Northern Woodlands magazine, and sponsored by the Wellborn Ecology Fund of New Hampshire Charitable Foundation.