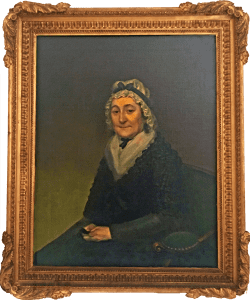 The Columbia County Historical Society (CCHS) has been awarded a matching Historic Preservation Grant from the National Society Daughters of the American Revolution, which will fund the restoration of two historically significant portraits in the CCHS Permanent Collection.

The portraits, which date to the early and mid 19th century, feature members of one of Columbia County’s most important and influential families: the Livingstons.

The first painting is Portrait of Mrs. Livingston (ca. 1800, 37 x 27 inches, oil on canvas). While the painting is unsigned, it has been attributed to Monsieur Robert, a French self-taught portrait artist who is believed to have fled to America during the French Revolution. Here, he became a well-regarded portraitist of notable Hudson Valley families, including the Livingstons, Schuylers and Van Rensselaers.

The subject of this painting, Margaret Livingston Livingston (1738–1809) was the daughter of James Livingston and Maria Kierstede, and resided in Columbia County. At the age of 20, she married her cousin, Col. Peter Robert Livingston (1737–1794). They had eleven children, seven of whom lived to adulthood. Their fourth son, Moncrieffe (sometimes spelled Moncrief) Livingston (1770–1853), is the subject of the second portrait being restored under the NSDAR grant. 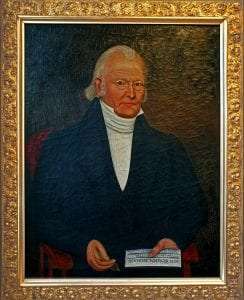 The family lived at The Hermitage, a brick, 1774 Georgian-style estate located in the Linlithgo hamlet of the town of Livingston. The building was demolished in 1983.

Portrait of Moncrieffe Livingston (ca. 1840, 36 x 28 inches, oil on canvas) was painted by John Wilkie, another prominent portraitist of Columbia County families. Around 1790, Moncrieffe married Frances Covert (1772–1814) and the couple proceeded to have thirteen children. Ten years after Frances’ death in 1814, Moncrieffe married Catharina Livingston Thorn (1785–1847) and lived at Livingston Manor in Sullivan County, New York, until his death at the age of 83.

Recently, the two portraits were assessed by painting conservator Hallie Halpern and frame restorer Tanja McGivney. The estimates from these assessments, as well as the historical importance of the subjects and artists, served as the basis for the NSDAR grant application.

For more information about the Historical Society visit their website.