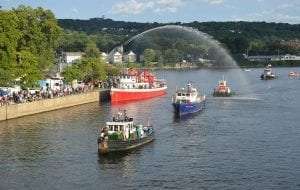 The Erie Canalway National Heritage Corridor and the New York State Canal Corporation have announced the Erie Canal is set to open to the public on Friday, May 21st.

This year the Canal will host 26 festivals and events including recreational activities, tours, concerts, and heritage celebrations, showcasing the Canalway Corridor’s heritage and the recreational appeal of the waterway and Canalway Trail.

This year’s events include summer concerts on the Erie Canal in Newark, Pittsford, and Seneca Falls, Kayak Through History Tours in Schenectady, Amsterdam’s Riverfest in August, Local History Cruises on the Champlain Canal in Schuylerville, and Doors Open Buffalo in September.

The canals form the backbone of the Erie Canalway National Heritage Corridor and connect hundreds of unique and historic communities. The 365-mile Erie Canalway Trail is a multi-use trail from Albany to Buffalo, much of it along the canal’s former towpath.