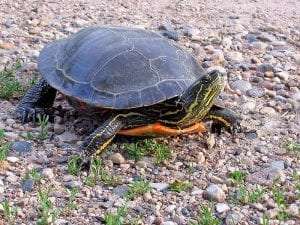 In any shallow, muddy-bottom body of water in spring, when the sun is shinning or a southerly breeze has elevated the temperature into the 50s or 60s, the painted turtle may be seen lounging peacefully, often in the company of others of its species.

As with all reptiles, turtles are cold-blooded. This means they are unable to generate any internal heat of their own. In order to elevate their body temperature to a level that is more favorable for carrying out numerous physiological processes, these slow moving creatures must first pull their body from the still frigid waters that engulf them, and then attempt to absorb as much solar radiation, or thermal energy from the air as possible. In this way the painted turtle can effectively restart its system after lying totally dormant over the long winter season.

Like several other cold-blooded organisms, the painted turtle passes the winter embedded in the layer of dark, muddy silt and organic debris that forms the bottom of most quiet waterways. Even though this shelled vertebrate has lungs rather than gills, it can remain submerged for prolonged periods without breathing when the water is close to freezing. As is the case with other reptiles, the painted turtle becomes increasingly more lethargic as the environment surrounding it cools in autumn, thereby decreasing its need for oxygen. As the temperature drops to within a degree or two of freezing, the painted turtle lapses into a state of complete dormancy which further reduces it need for this essential elemental gas.

The very limited amount of oxygen needed to sustain life comes from this turtle’s ability to absorb this dissolved gas from water that is repeatedly drawn into a special sac near its tail and into its throat.

As the sun’s rays become more intense in mid to late April, and begin to penetrate the bottom muck, the painted turtle’s internal temperature starts to rise. The dark color of this turtle’s back shell allows it to effectively absorb the sun’s infra-red rays, even when it is below the surface. Exposure to solar radiation can boost a turtle’s core temperature by several degrees above that of the water which surrounds it. This helps provide it with the energy needed to resurrect itself from the bottom muck and become somewhat active again.

When conditions above the surface become favorable, the painted turtle swims to an object that it can climb onto in order to lift itself completely from the frigid water. Logs that are floating on the surface, a small island of peat, or a deteriorating muskrat house are all common places that the painted turtle visits to bask in the sun. Since these spots are separated from the shore, the turtle is less likely to come under attack from a shoreline predator.

Since this creature’s metabolic state is still drastically depressed by the cool surroundings, the life processes within this normally sluggish critter are not yet fully functional. Even acquiring nourishment becomes a challenge, as the turtle’s digestive system is unable to effectively process any of the various items consumed by this omnivore when it is immersed in the water. By basking in the sun, the painted turtle is able to elevate its core temperature to a level that allows for a more effective break down of the food ingested when it forages along the bottom.

Along with promoting digestion, the temporary warming of the turtle’s body helps facilitate the process of egg formation within mature females. It is usually in May when the females leave their watery home and venture onto dry land to lay their eggs. As with all reptiles, the painted turtle must leave the safety of the water and seek out an appropriate spot on land in which to deposit her eggs.

Painted turtles regularly emerge from the water during the spring whenever the air temperature is warmer than the water, or when the sun is beating down on a particular spot in their home. For this creature, it is more than just a pleasant way to relax, but a method allowing for the digestion of their food, and the development of their eggs.