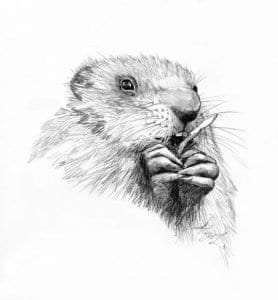 One summer we had an ongoing battle with a woodchuck. Unbeknownst to us, it had dug a burrow in an ideal location — in the center of our dense raspberry patch, about 10 feet from our vegetable garden. The woodchuck then dug a hole under the garden fence and feasted on beans, peas, and other tender vegetables.

We filled the hole and placed a large rock over it. The next day the rock had been moved and the hole re-dug. We tried more rocks, then sheets of metal roofing, but every day these barriers were removed. Finally we put a Havahart trap near our garden — and caught a young skunk (which was released, very carefully)!

In addition to eating vegetables, woodchucks dine on clovers, grasses, dandelions, goldenrod, asters, apples and berries. They occasionally eat insects such as grasshoppers. In the spring, before much green vegetation is available, they will also feed on the buds and bark of deciduous trees and shrubs.

As many gardeners can attest, woodchucks have a voracious appetite. They emerge from hibernation having lost 30 to 40 percent of their body weight, and they’re keen to make up the difference, consuming up to half a pound of vegetation a day. In late summer and fall, they’ll especially start piling on fat, building up energy reserves for winter.

Besides eating, this time of year, female woodchucks are raising young kits. Mating season takes place in March, and females often mate with more than one male, so kits in the same litter often have different fathers. Born blind and naked in April or May, the baby woodchucks grow quickly. By four weeks they are furred and their eyes open. At this time the youngsters (averaging four to five to a litter) begin to appear at the burrow entrance. Their mother brings them green vegetation to eat.

Juvenile woodchucks emerge from the den at five weeks. Most disperse to seek out their own territories in July, though some female kits may stay with their mothers until their second spring. Dispersal is a vulnerable time for woodchucks. During this period they may fall prey to many predators, including coyotes, bears, foxes, bobcats, mink, weasels, hawks and owls.

In addition to feeding predators, and ridding us of those pesky extra vegetables, another benefit woodchucks provide is soil aeration. While digging their burrows, they move large amounts of subsoil. Groundhogs are designed for digging. They have short, powerful forelegs equipped with stout claws, and low ears that can close to keep out dirt. Their sturdy incisors are used to cut roots and pry out loose stones as they dig.

Summer burrows are often located in a field or pasture, with the main entrance often below a stump or large rock. An escape hole is concealed in nearby vegetation. Connecting these holes is a network of tunnels two to six feet underground, depending on soil type, and up to 40 feet long. Burrows have a nest chamber lined with dead leaves and dried grass and several blind pockets which serve as latrines. In the winter, woodchucks typically retreat to a deeper burrow, often on a slope in the woods, however sometimes they simply remodel, digging out a hibernation chamber at a lower level of the summer burrow.

These dens provide shelter for many other animals. A Wisconsin study found 20 different species associated with woodchuck burrows. Rabbits, opossums, raccoons, and skunks may use part of the burrow while the woodchuck is hibernating. Other animals inhabit vacant or abandoned dens: otters, chipmunks, voles, shrews, weasels, and snakes. Coyotes and foxes often enlarge old woodchuck dens for their own use. Foxes have been known to use a den while the woodchuck is still living in the same tunnel system.

We have finally solved the problem of woodchucks raiding our vegetable garden by wiring a one-foot-wide strip of fencing laid flat on the ground around the perimeter of our four-foot-high garden fence. Grass grew up through the wire strip, concealing it. When a woodchuck starts to dig next to the garden, it hits the wire and stops. Neighbors have had success with a couple of low strands of electrified wire around their gardens, though regular weed-whacking is required to prevent the wire from shorting out.

This summer, when I work in my garden and hear the whistles of the woodchucks in the adjacent pasture, I’ll appreciate all the ecological benefits they provide. And be grateful that they aren’t actively appreciating my vegetables.

Susan Shea is a naturalist, conservationist, and freelance writer who lives in Brookfield, Vermont. The illustration for this column was drawn by Adelaide Tyrol. The Outside Story is assigned and edited by Northern Woodlands magazine, and sponsored by the Wellborn Ecology Fund of New Hampshire Charitable Foundation.