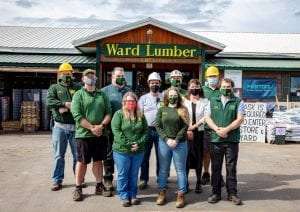 The employees of Ward Lumber have made history by purchasing the 130-year-old business as a worker-owned cooperative.

The lumber products and hardware store, which has locations in Jay and Malone, NY and employs over 50 local people, has been in Jay Ward’s family for four generations. Ward, who will continue his leadership role as the company’s chief executive officer, completed a contract with his employee team that makes Ward Lumber the largest worker-owned cooperative in the region.

“Every business is going to go through a transition, whether that is by design or default,” said Ward. “Rather than choose liquidation or selling to some other business that would change the culture, I wanted to look at employee ownership.

“Employee ownership vests the control of the company in the hands of the people that work it every day, who live in the communities that we serve, and have that vested interest in ownership,” Ward said. “I really wanted to empower the employee team to make decisions on their behalf and for their benefit.”

Ward Lumber has been a business pillar in the community since 1890, providing local jobs, supporting the region’s farm and construction industries, and having direct and indirect economic impacts on area businesses and communities.

Ward Pine Mill, the manufacturing division of the Ward Lumber family enterprise, is operated by Jay’s brother Jeff Ward. Ward Pine Mill became an independent business in 2017 and is not included in the employee ownership transaction.

“The main thing that’s changing is I’ll be reporting to a board of directors of our employee team,” Ward said, noting they have been working on the transition process for over three years. Ward is expected to remain heavily involved operating the business for the foreseeable future.

Alex Pond, a board member who has been employed with the company for over six years, said, “This co-op is more than a change in ownership. It’s an opportunity to shape a future for Ward Lumber that is best for the business, our staff and the community. It’s an amazing way for people like me to help carry Ward Lumber into the next generation.”

Ward Lumber’s journey to employee ownership began in May 2018, when Jay met with U.S. Senator Kirsten Gillibrand (D-NY) at an event hosted by the Adirondack North Country Association (ANCA) at its Saranac Lake offices. The Senator met with local business owners and economic development leaders to promote the Main Street Employee Ownership Act, which proved to be instrumental in Ward Lumber’s ownership transition. The federal legislation, designed to improve access to capital and supply technical assistance to businesses interested in employee ownership, was championed by Gillibrand and passed with bipartisan support in 2018.

Ward and his staff have worked closely with Rob Brown, Director of Business Ownership Solutions at the Cooperative Development Institute (CDI), to provide intensive support and training on the business transition process. Brown helped guide the team through the worker ownership transition — from initial inquiry to financial and business analysis to legal structuring and financing of the buyout.

Ward Lumber’s transition to worker ownership comes at a time when local businesses face significant challenges, exacerbated by the COVID-19 crisis. In New York State alone, even before the pandemic, an estimated 3,700 businesses closed each year due to owner retirement, leading to a loss of 13,260 jobs annually. Surveys indicate 79% of business owners want to retire in the next ten years, 57% in less than five years, and 33% in less than three years. Fewer than one in five owners have a credible succession plan, and most do not understand business transition options or processes.

As New York’s North Country contends with these odds, its rural communities face widespread business closures and job losses that would have detrimental impacts on the regional economy. Employee ownership models such as worker cooperatives offer a viable solution that can help sustain businesses and jobs. Worker-owned businesses tend to maintain above average retention rates of talent, weather economic stressors better than traditional business models and keep wealth in local communities.

This and other business transitions across the region have been supported by the North Country Center for Businesses in Transition (CBIT), a program that was spearheaded by the ANCA in 2018. CBIT has representation from 12 economic development organizations in northern New York whose partnership connects businesses with resources and experts focused on cooperative ownership and other succession strategies.

A ribbon cutting ceremony will take place at both Jay and Malone store locations and virtually via Facebook Live at a date and time to be determined in June 2021.

Business owners interested in transitioning their companies to a worker ownership model are invited to contact the Center for Businesses in Transition at transitions@adirondack.org, the Cooperative Development Institute at rbrown@cdi.coop or SUNY Canton SBDC at smithangela@canton.edu.