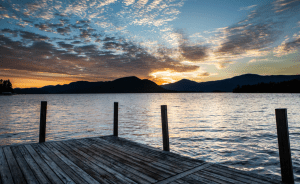 Antiquated and improperly maintained residential septic systems are creating a growing water-quality crisis across the Adirondack Park, according to a new report from the Adirondack Council.

To stem this unwelcome tide, the park’s largest environmental organization is urging New York State and Adirondack towns and counties to enact mandatory septic system inspection programs that include provisions for upgrading, as well as public funding opportunities, throughout the Lake George watershed and beyond. The report “Protecting Adirondack Waters from Septic System Pollution: A White Paper by the Adirondack Council” is available online for free.

“A comprehensive program will help ensure that septic systems are working properly and protecting Adirondack waters from harmful algal blooms, which are ravaging waters across the state, and other threats,” Adirondack Council Executive Director William C. Janeway said in an announcement of the report sent to the press. “Older, poorly maintained or inadequately sized septic systems allow excessive amounts of nutrients from inadequately treated wastewater to get into lakes and rivers. The resulting chemical changes can be harmful to fish, aquatic plants and humans.”

The Council is encouraging municipalities to follow and expand on septic system protection measures now in place in the Lake George watershed. That program, a collaboration of local communities, the Lake George Association, and The FUND for Lake George, is considered the most extensive of its kind in the region. The Council says it should serve as a model for other communities.

Most of the Adirondack Park’s homes, businesses, hospitals, and other public accommodations use on-site septic systems. Only a small fraction of the park’s communities have municipal sewer systems and modern wastewater treatment facilities.

The Council’s Clean Water Program Coordinator David Miller – author of the report – has been working with Adirondack municipalities to obtain state and federal grants to build, repair and replace aging sewage infrastructure. The Adirondack Council over the past several years have issued three reports identifying hundreds of millions of dollars Clean Water Infrastructure needs in the Adirondack Park. They have worked to help secure more than $58 million in grant funding for wastewater treatment and drinking water facilities and systems in Adirondack communities since 2015.

“Major elements of the report’s agenda are education for residents, identification of failing systems through inspections, use of new technologies, grant funds for remediation and expanded water quality monitoring,” said Miller. “The report also indicates a growing concern throughout the Adirondack Park that more information is available on systems failing and not functioning properly due to the age of these septic systems on the shores of our lakes and streams.”

There are many antiquated, unmaintained and undersized septic systems in the park, but only a few towns currently require that they be inspected at any time after their initial construction. So as they breakdown and steadily release pollutants, they are out of sight and often overlooked as a source of pollution, Miller said.

“In addition, there is the challenge of costs to the owner for the repairs,” Miller noted. “We all want clean water. No one disagrees with that. But not everyone is ready to take on the expense of replacing their septic system. So having access to state grant funds and inexpensive means of financing repairs and replacements will be key to any program’s success.”

The report concludes that in order to empower private property owners to make informed decisions regarding their individual septic systems, an education component is needed for both landowners and local governments. Whether it is septic system maintenance, design or assistance with replacement and construction, this information will be critical for the long-term protection of local waterways, groundwater, and aquifers. Most importantly, local governments across the Adirondacks need assistance putting in place education programs as well as local ordinances to ensure private septic systems are frequently inspected. Not only when properties are sold, but also for long-term homeowners on a regular basis. Also, low- and no-interest financing options and other incentives including state grant funds can help residents invest in the long-term health of their septic systems should be explored.

“The report’s blueprint for the Adirondack Park builds and expands upon the policies and approaches being used on Lake George,” said Janeway. “We need to expand local ordinances park-wide to include all existing septic systems. We must learn from examples like the Town of Inlet, which was the first Adirondack town to enact an inspection ordinance, more than a decade ago. It did so after swallowing the cost of a new sewage treatment system, knowing that the fate of the Fulton Chain of Lakes was at stake. Inlet showed us all the way forward. We are thrilled to see the Lake George basin communities making similar progress.”

He pointed to the New York State’s Septic System Replacement Grant Program as one means of helping local residents meet the costs.

Recently, six Adirondack counties have been made eligible by the NYS Dept. of Environmental Conservation in targeted watersheds to apply and administer state grant funds under the State’s Septic System Replacement Program. The program can pay up to 50% with a $10,000 cap for the residents’ costs to replace their septic system. Counties comprising roughly half of the park: Essex, Warren, Washington, Clinton, Herkimer, and Hamilton. Implementation has only just begun and only a small portion of the need allocated according to the Council.

The towns of Queensbury and Bolton now require septic system inspections, and repairs if needed, before a property can be sold. Since the start of the Queensbury program, the town has found 80% of the more than 100 systems inspected to be in need of replacement or repair.

The FUND for Lake George also worked closely with Queensbury and property owners on Dunham’s Bay to create the lake’s first septic management district and provided a matching grant program for system replacements.

The report describes The FUND’s Safe Septic Systems initiative, which includes partnerships with Adirondack Trust Company and Glens Falls National Bank to provide no-interest or low-interest loans to eligible property owners. The report also highlights The FUND’s SafeSepticSystems.org website, which helps property owners determine if their system is in need of replacement or repair and encourages similar educational efforts throughout the Park.

The Lake George Association also provides a variety of educational resources on system maintenance for property owners. The LGA and The FUND are awaiting final approval from New York State on a merger of the two organizations that will enable them to expand and enhance these efforts.

“We applaud the Adirondack Council’s efforts to document and raise awareness of this growing water quality crisis across the Adirondacks, and for their recognition of the extensive work we have done on Lake George,” said Walter Lender, executive director of the Lake George Association. “Lessons learned on Lake George can be used and implemented throughout the Park, especially in areas where there are limited local resources.”

“Lake George is a working model for how to protect Adirondack water bodies from antiquated or improperly maintained septic systems,” said Eric Siy, executive director of The FUND for Lake George. “We are extremely proud of the progress we are making to protect water quality and are happy to share our experience and expertise with our Adirondack neighbors to help them develop similar solutions and optimize outcomes.”

Lake George Waterkeeper Chris Navitsky, whose research has informed much of the Lake George septic system protection effort, said, “The septic system problem is best addressed on a watershed basis with comprehensive management programs. The science and best-practices from Lake George will be just as effective elsewhere in the Park as they have been on Lake George to protect the Park’s greatest resource — its water.”

The Waterkeeper is a program of The FUND for Lake George.

“While the progress and successes on Lake George presents a model for the entire park, there is still much work to be done and expanded program needs throughout the Adirondack Park as well as on Lake George as the report indicates. Only through expanded and periodic inspection programs for all existing septic systems and a commitment by New York State to expand their water quality monitoring efforts — with funds for research institutions to participate – can we identify the NYS State replacement fund assistance needs and which priority water bodies are being impacted,” Janeway said. “Without comprehensive inspections that lead to upgrades and replacements, and a program for funding those improvements, we are caught in the trap of reacting to the problem after the damage has already been done.”