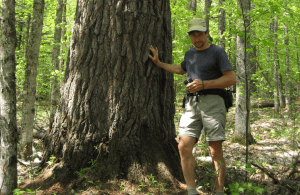 The Adirondack Council has hired John Davis, a wildlife advocate with Adirondack conservation experience, to advocate for wild land restoration and reconnected wildlife pathways that have been disturbed by roads, buildings and other obstacles.

The Adirondack Park is a 9,300-square-mile expanse of forests and lakes interconnected by thousands of miles of navigable rivers and 30,000 miles of brooks and streams. During the early phases of the American Industrial Revolution, the area that is now the Adirondack Park suffered great damage from clear-cut logging, which led to erosion-driven water pollution, rapid evaporation and loss of wildlife. The State’s “forever wild” phrase was added to the NYS Constitution in 1894.

Davis served as Conservation Director of the Council from 2005 till 2011. He will retain his complementary position as Executive Director of The Rewilding Institute, which serves the conservation community by promoting strategies to restore wildlife and wilderness throughout North America and the world.

Davis was a co-founder of The Wildlands Project (now Wildlands Network) and Wild Farm Alliance and has served on boards of directors of wilderness groups across the nation. He co-edited Dave Foreman’s landmark book Rewilding North America (Island Press, 2004).

He is also expected to seek opportunities to make human-built infrastructure, especially roads and culverts, more durable in the face of more intense, climate-driven storms, while easing safe wildlife movement.