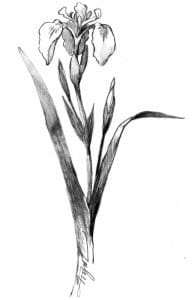 Irises, with their large, exotic-looking flowers waving atop tall stems, are among the showiest early summer blooms. Most of North America’s nearly 30 native iris species are found in the southeastern states and on the Pacific coast; but a few irises grow in the northern woodlands. The most common are the native blue iris or blue flag iris (Iris versicolor) and the invasive yellow iris (Iris pseudacorus).

From May through July, blue irises bloom in forested wetlands and along the edges of ponds and streams. They have long, pointed leaves and a peduncle, or stalk, that holds three to five deep blue to purple flowers. Each flower has three petals that give clear directional signals to pollinating bees: a yellow patch at the base and dark veins leading to the center. Hummingbirds and some butterfly species visit irises to feed on the nectar.

The yellow – or yellow flag – iris is native to Europe, northern Africa, and Asia. Its showy, lemon-yellow beauty made it a favorite garden bloom, and it was likely imported from Europe and the British Isles as an ornamental in the early 19th century. It escaped its perennial bed boundaries, establishing itself in nearly every U.S. state and most Canadian provinces.

Like many invasive species, Iris pseudacorus tolerates varied soil and climate conditions. It also propagates easily, forming a mat of branching rhizomes that grows so dense that it prevents other plant seeds from germinating. Its seeds (several hundred per plant) can float great distances and withstand drought and high acidity and salinity. Because of its adaptability, yellow iris was formerly used to control erosion and to absorb metals and nutrients in wastewater treatment facilities, further aiding its spread.

Now, yellow iris is a growing scourge, ranking high on many states’ lists of invasive plants. Masses of yellow irises crowd out native vegetation, including other irises, cattails, and rushes that provide food and cover for ducks, muskrats, and other wildlife.

The yellow iris is in direct competition with green arrow arum, a major food source for wood ducks. It is on New Hampshire’s list of prohibited invasive upland plants and classified as a noxious weed by the Vermont Agency of Agriculture, meaning that its sale, movement, and distribution are prohibited.

Many groups are working to remove this lovely but bothersome plant from wild places. These include the Lewis Creek Association, whose partners and volunteers, with funding from the Vermont Fish and Wildlife Department, work to limit the spread of yellow iris in the Lake Champlain watershed. They have documented clumps of 5-by-12 feet and stands of more than 500 flowers that create a monoculture of more than 30 square feet, according to LCA program manager Kate Kelly.

“It’s important to manage their growth before they become well established,” she said.

To remove yellow iris, it must be completely dug out, which is no easy task. LCA has used herbicides such as Rodeo (approved for use in wetlands) on large, non-diggable clumps. Yellow flag iris can be identified by its leaves before it flowers: they are more yellow-green than those of blue iris, have a yellow tint at the base, and often have a more prominent midrib compared with blue flag iris leaves, which are often purplish at the base.

“Herbicide is an acknowledged control method,” said Robert Hyams, of Habitat Restorations Solutions, who works with LCA. “We will use it on the largest clumps and apply in fall, when the water table is typically lower and overspray risks are greatly reduced as native plants and amphibians are much less active.”

Another native iris that grows in the Northeast is I. prismatica (slender blue flag) which is rare but occurs in every New England state except Vermont, according to the Native Plant Trust. New Hampshire state botanist William Nichols said there are 12 known locations for slender blue iris in the state. This iris is slightly shorter than I. versicolor and has thin, grass-like leaves.

Given their beauty, it’s no wonder that irises – of all colors – were favored subjects of Claude Monet and Vincent Van Gogh. Not being botanists – or clairvoyants – they might have been surprised to learn that yellow irises would ever be unwanted, anywhere.