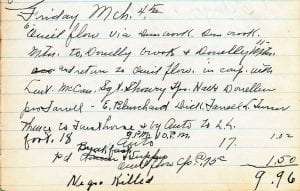 Ernie Blanchard and Lester Turner who lodged an indignant complaint against an unnamed black man living in the Adirondack woods in 1932 were no strangers to crime. They were well acquainted with a range of infractions – from illegal construction to rum-running to illicit hunting.  For some of those crimes they were fined, others were the subject of casual boasts long after the fact.

Such crimes hardly distinguished them. Adirondackers have long subsisted by hook or by crook from a rough landscape. The State of New York, once eager for colonists to line its coffers with the surplus generated by Adirondack development, had by the 1930s reinvented itself as forest guardian, a posture that put often locals and lawmen on opposite sides of a long war over access to Adirondack game. It was marriage of convenience that set strange bedfellows out after the suspect living rough in the woods in the Central Adirondacks that spring.

After they had shot and killed the man, considerable confusion emerged in the testimony given at the coroner’s inquest held some three weeks later, though all agreed on the following account.

A preliminary search for the man on March 2nd turned up only tracks. The next day, searchers retreated from the woods to report and resupply. On March 4th, a detail of nine departed O’Neil Flow Camp near the town of Indian Lake: complainants Turner and Blanchard, Game Protectors Merritt Lamos and Jack Farrell, Jack’s brother Dick, State Police Lieutenant C.B. McCann, Sergeant Ed Skowrya, and Troopers A.J. Hall and F.J. Donnellan. All but Blanchard and Turner were armed. Their orders, according to senior officer McCann, were to approach the man carefully, convince him to lay down his arms and talk.

That’s not what happened, as McCann would later learn. He was last in a long line of men led by Lester Turner, who was a quarter mile ahead of their commander when they spotted their quarry around the Essex County line Dunn Brook Mountain. The troopers, struggling in their snowshoes, had fallen behind the more experienced local woodsmen. Skowyra had given his Winchester rifle to Turner by the time they overtook their man.

Those at the front of the posse shouted, and the suspect broke into a run. Plan A blown, they fanned out to surround him. A gunfight ensued, during which Turner, Hall, Lamos, Skowrya and the suspect fired. In the midst of the shooting, he was alleged to have cried that they would never take him alive, according to various witnesses. The claim would have been at home in a dime store novel.

Turner was hit but unharmed, but one of his own bullets apparently landed the fatal blow.

It was over in minutes. The lawmen tried to ascertain his identity while he bled out, but he never spoke again. By the time McCann caught up with the others, they had removed his body to an abandoned lumber camp some way down the mountain, where the man had apparently been sheltering.

The coroner’s inquest raised more questions than it answered. The facts reported could not have covered the State Police in glory, even in 1932: a civilian accuser not only joined but led a manhunt ending in the death of a suspect wanted for questioning in a dubious “crime,” firing the fatal shot with a police weapon while the officer in charge was stuck in the snow.

The facts left unsaid are even more troubling.

Did the suspect fire first? Turner and Blanchard made this claim, having witnessed the gunfight from the beginning. Jack Farrell answered both yes and no to this question. The others could not, or would not, confirm it.

Did the physical evidence support their allegation? While the suspect was said to have fired some five times with at least one of two shotguns, no shell casings were collected at the scene. A pellet from the suspect’s gun allegedly struck Turner in the hip, miraculously stopped by a wallet in his pocket. These artifacts might have proven that the suspect discharged his weapon, given that the only other man with a shotgun, Dick Farrell, never fired at all. But they were never entered into evidence; Turner said he just took them home.

Did the posse identify themselves as police? This critical question was neither asked nor answered. Could the suspect have identified a uniform from the 150 yards said to lay between himself and the Game Protectors at the outset? Unknown.

Were the civilians issued clear instructions? Responses varied, but Turner recalled none at all. What were the civilians authorized to do? The Elinskas account states that Turner and Blanchard had been deputized, but this was never mentioned at the inquest.

Why did no one else confirm a claim by Skowrya – who call the man a n_____ in his testimony – that the suspect feigned surrender and then went for his weapon in an unsuccessful ambush attempt? No one asked.

Did anyone render the man medical assistance once he was down? The subject never came up.

Based on the evidence provided by survivors, any rational reader is left to conclude that what the victim could have seen coming at him through the woods was not the law, but a lynch mob.

The coroner exonerated the posse of all wrongdoing.

There is a considerable story after the story, too long to recount here: what happened to the victim’s remains, what folk memories endure, and of course, who he might have been. My research is ongoing.

I can offer no definitive verdict on what happened in the woods in 1932, beyond a profound disquiet with the callous disregard for this man’s life, then and now. Anyone who cares about justice should be troubled by the way this case was executed and investigated. Anyone who cares about history should be dubious about the perpetuation of its myths. Anyone who knows racism in America will recognize its ugly trademark in these details.

The law denied this man due process in life. Henceforth, I hope the rest of us will grant him that much in death.

This article was first published by the Adirondack Daily Enterprise.