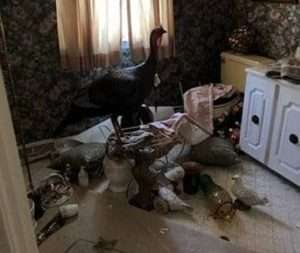 On March 23rd, an Erie County woman had a rude awakening when a turkey broke into her home.

The woman heard a large bang and crash from her upstairs bedroom and discovered a turkey had busted through a glass window. The woman confined the bird to an upstairs bathroom by closing the door until New York State Environmental Conservation Office (ECO) Machnica arrived to assist.

The turkey flew around the bathroom, crashing into mirrors and walls, leaving broken glass everywhere. ECO Machnica contacted ECO Koepf for assistance to remove the turkey. The two Officers used a neighbor’s fishing net to pin down the turkey and then grabbed the bird and brought it outside before it could cause further damage.

The ECOs then set the turkey free and helped the woman clean-up the mess left behind.

Photo of turkey perched atop the mess created in bathroom of Erie County home provided.