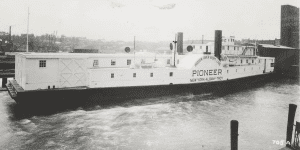 Also known as train ferries, or car ferries (not to be confused with auto ferries), they were fitted with railway tracks and doors at each end to allow for loading and unloading.

The first train ferries were established in the 1830s in Scotland over the Forth and Clyde Canal, and just a few years later in 1836 the Susquehanna began hauling railroad cars between Havre de Grace and Perryville, in Maryland. The first modern train ferries, with roll-on/roll-off capability for easy transfer of cars, were established in the U.S. in the 1850s. Coming into more widespread use after the Civil War, they were specialty steamers often used in conjunction commuter and long-distance passenger trains. 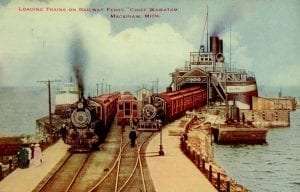 On the Hudson River, most rail-car ferries for freight were actually car floats, un-powered barges moved by tugboat on the river. There were nearly 20 companies operating car floats around the city of New York in the early 20th century.  They operated more than 300 at their peak. The New York Central’s 69th Street Transfer Bridge at Gantry Plaza State Park is a relic of the car float era.

Self-powered train ferries were rarer. In 1876, the Maryland was established between Jersey City and Mott Haven (the Bronx). Two tracks were located on the main deck and onto these were brought drawing room, sleeping and ordinary passenger cars along with baggage, freight, express and mail cars. 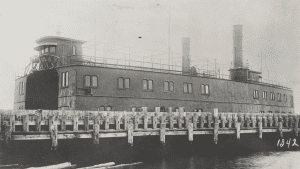 Hudson River steamboat historian A. Fred Saunders located a self-powered train ferry operated for a short time at Newburgh, also named Maryland. This boat was smaller than its earlier namesake, but operated in much the same way.  A steel hulled side-wheeler built in Wilmington, Delaware, in 1890 for the New England Transfer Co. (part of the New York & New England Railroad), it was sold in 1913 and subsequently used as a dredge.

Another self-powered train ferry had an even shorter stint on the Hudson according to Saunders, whose extensively researched scrapbooks detailing Hudson River steamboats are available online.  The Ferdinando Gorges was a steel side-wheeler built at the Bath Iron Works in Maine for the Maine Central Railroad in 1909 with three railroad tracks on the main deck.  It ran across the Kennebec River between Bath and Woolwich, but was sold to New Jersey Steamboat Company in 1927, which operated the Peoples Line of night boats known as the Hudson River Night Line.  There it was renamed Pioneer, one end was enclosed with doors, and Saunders reports it carried automobiles between New York and Albany (although Troy was also painted on it’s wheel box). 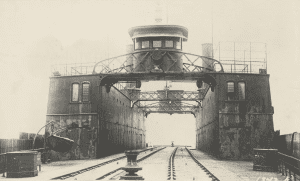 The Pioneer was sold in 1931 to the Peninsular Ferry Company and used as the first automobile ferry across the mouth of the Chesapeake Bay between Cape Charles and Little Creek. It was purchased by the American Barge Line in 1935, converted to diesel, and operated by them until at least 1943.

The only remaining train ferry on the Hudson is an un-powered car float operation in Upper New York Bay between Jersey City and Brooklyn. Since service ended across what is now the Walkway Over The Hudson at Poughkeepsie in 1974, it’s the only freight rail crossing of the Hudson River below Selkirk, a situation that creates what’s known as the Selkirk Hurdle.

(Another freight railroad bridge across the Hudson near Mechanicville is a testament to that community’s long standing position as a major rail hub, established when the Rensselaer and Saratoga Railroad laid a track there in 1835 that intersected with the Champlain Canal.)

Take a look at more photos of train car ferries and floats here.

Illustrations, from above: the Pioneer; Loading trains on the ferry S.S. Chief Wawatam in Mackinaw, Michigan (used extensively by the New York Central); and two views of the Maryland (photos courtesy A. Fred Saunders scrapbook Catskill Public Library).