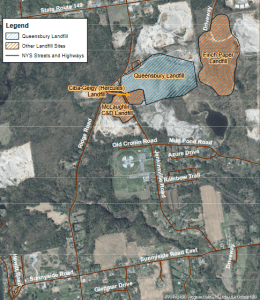 New York State is committing resources to perform and/or oversee an investigation of emerging contaminants, namely 1,4-dioxane and per- and polyfluoroalkyl substances (PFAS), detected in groundwater near a complex of inactive landfills between State Route 149 and Mud Pond Road in the Town of Queensbury, Warren County.

The New York State Departments of Environmental Conservation (DEC) and Health (DOH) say the levels may be a concern for nearby private wells and with the property owners’ consent are conducting testing of those wells. The Departments say that to date, PFAS have not been detected in any private wells above New York State’s public drinking water standards although 1,4-dioxane has.

Low levels of 1,4-dioxane have been detected in some private wells at levels above the State’s public drinking water standards. “The highest levels detected to date do not pose a significant health risk, and are well below levels of 1,4-dioxane associated with health effects,” a State announcement said. “However, DOH always recommends people take actions to reduce exposure when drinking water standards are exceeded.”

DEC is currently providing bottled water to residences whose results were received and showed 1,4-dioxane levels at or above standards. DEC and DOH is expected to continue to oversee the private well sampling program, including taking actions to address exposures where necessary. DEC is also working with the owners of the landfills in the area to collect on-site samples, and is expected to oversee additional investigations where they deem appropriate.


The Queensbury Landfill was a municipally owned and operated solid waste disposal site in operation from the late 1940s through 1993. A portion of the property currently operates as the Town of Queensbury Transfer Station.

DEC’s Division of Materials Management (DMM) performed groundwater sampling at the Queensbury Landfill site in January 2020, under the Inactive Landfill Initiative, and found detections of 1,4-dioxane and PFAS, specifically perfluorooctanoic acid (PFOA). Sampling from five existing landfill monitoring wells indicated maximum concentrations of 210 parts per trillion (ppt) PFOA. The maximum concentration at the landfill of 1,4-dioxane was detected at 6 parts per billion (ppb). While the groundwater at the landfill is not used for drinking, these findings led to a recommendation by DOH to sample off-site private drinking water supplies because levels detected exceeded public drinking water standards for PFOA (10 ppt) and 1,4-dioxane (1 ppb).

DEC is planning an investigation at the Queensbury Landfill under the State Superfund Program. The first step under the State Superfund program is a Site Characterization (SC) investigation to determine if hazardous waste is present and whether it poses a significant threat to public health or the environment. The Site Characterization is expected to include additional installation and sampling of groundwater monitoring wells, collection of samples from any visible seeps, and collection of surface water and sediment samples, along with a review of historical documents to determine types of waste placed in the landfill. Based on these findings, DEC may initiate a Remedial Investigation (a more detailed investigation) to determine the full extent of contamination and develop a plan for interim cleanup actions, if appropriate, or to support a plan to clean up the site.

The Finch Paper Landfill is a private inactive landfill, reported by the company to only used for de-watered paper mill sludge. The landfill is located to the northeast of the Queensbury Landfill. The Finch landfill operated from 1977 until approximately 1997, at which time it was closed with an engineered cap that included a geomembrane cover designed to prevent surface water infiltration into the waste mass and protect water resources.

Last month, DEC designated the landfill as a potential inactive hazardous waste disposal site, and a Site Characterization investigation is planned. DEC sampled the existing on-site wells on April 1, 2, and 6, 2021 as part of the ongoing investigation into groundwater contamination and will determine next steps based on a review of the data.

The Ciba-Geigy Landfill is a seven-acre inactive private landfill located on land off of Jenkinsville Road owned by the Town of Queensbury just southwest of and adjacent to the Queensbury Landfill. The site has a liner system consisting of a double layer of bentonite clay and was capped and closed in 1990. This site was used for disposal of hazardous waste paint sludge from Ciba-Geigy’s manufacturing processes located in nearby Glens Falls. An adjacent surface impoundment was used to collect leachate from the landfill cell and runoff from a truck washing station.

DEC is planning to conduct sampling of on-site wells in April 2021 as part of the ongoing investigation into groundwater contamination.

The McLaughlin Construction and Demolition (C&D) Debris Landfill is an inactive landfill located directly to the west of the Ciba-Geigy Landfill and the Queensbury Landfill. This landfill accepted C&D debris and operated from 1992 until it was closed in 1999. It was capped with an engineered cap system, which included a geomembrane cover.

DEC is installing new groundwater monitoring wells at the site to conduct sampling in April 2021.

More information about the contamination and DEC and DOH’s role in monitoring and clean-up can be found online.

Map of Polluted Landfill Sites In Queensbury provided by DEC.