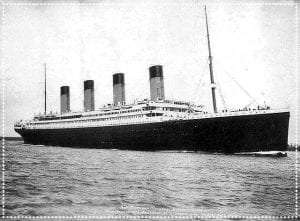 Staatsburgh State Historic Site is set to commemorate the 109th anniversary of the Titanic’s maiden voyage and tragic end with a number of events during the month of April.

Staatsburgh Quiz Nights: Titanic-Sized Edition are set for Friday, April 9th and Thursday, April 15th at 7:30 pm, and will feature fun, interactive ways to learn about the story and legacy of the ship and test your knowledge, from the comfort of home. Based on the site’s popular online “pub-trivia”-style events, the program will focus on the story and legacy of Titanic – including its Hudson Valley connections, countless film adaptations, and the fascinating parallels between Staatsburgh and “The Ship of Dreams.” Quiz nights are free and open to the public. Registration is required and can be completed online.

Programs on the Portico: Staatsburgh & the Titanic are set for April 18th, 23rd, 25th, and 30th at 3 pm. This 30 minute Program on the Portico will explore Staatsburgh’s connections to the “Ship of Dreams” – from its passenger lists to interior design. Staatsburgh’s owners, Ruth and Ogden Mills, had planned to sail on the Titanic’s second voyage. Historic site staff will display some reproductions of items that would have been seen on the Titanic, including life vests, a telegraph key, and an officer’s jacket. Reservations are required to ensure distancing, and can be completed online.