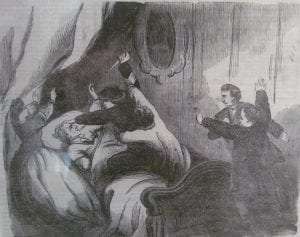 Beginning at noon, representatives from the Seward House Museum and the Ford’s Theatre National Historic Site will discuss the coordinated attack led by John Wilkes Booth and a band of conspirators, which would result in a night of bloodshed throughout the Capitol, and the attack on the bedridden Secretary of State William H. Seward in his Washington, D.C house that would leave five people wounded.

This program will be held via Facebook live. For more information or to watch the program, visit the Seward House Museum Facebook page.

Illustration of the attack on the bedridden Secretary of State William H. Seward.