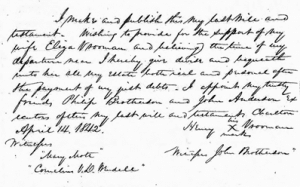 On April 15th, 1842, Henry A. Vrooman, a forty-one-year-old farmer living in West Charlton, Saratoga County, passed away in his home near the intersection of what is now Eastern Avenue and Sacandaga Road. He was laid to rest in the nearby West Glenville Cemetery. Only eight months earlier he had married forty-year-old Eliza McClelland, a widow with two children from nearby Blue Corners on the western edge of the Town of Charlton. It was a roller-coaster eight months.

Only a few months after their marriage, Henry’s new bride packed her belongings in a sleigh and left just before their first Christmas together. Henry started telling friends that he did not want her to return. However, calling it just a family visit, Eliza was back after only a month.

During the winter, Henry became ill. Dr. David Low, the attending physician, informed him that his case was “perfectly hopeless” and that he should make arrangements for the disposition of his property. The day before he died, Henry Vrooman asked his brother-in-law, attorney John Brotherson, to take down his will where he gave everything to his wife Eliza. Others present that day was his cousin Cornelius V. D. Wendell, Eliza’s friend Mary Mott, and Henry’s brother John.

After the will was placed in the hands of the Surrogate Court, Henry’s brother requested an investigation to prove its validity. Though present when his brother had spoken his will, John claimed he had been sick and in bed on the other side of the room, unable to hear his brother’s whispered words.

Two months after Henry died this proceeding was held in Surrogate Court , with those who had witnessed the signing of the will and other interested parties attending and giving testimony. They were all to offer different perspectives on the short marriage of Henry and Eliza.

The first to testify was Henry’s cousin, Cornelius V. D. Wendell. After being sworn in, Cornelius said that he was present when Henry Vrooman made known his desires about the distribution of his property and “made his mark,” to sign the document.

The next to give testimony was Mary Mott, Eliza’s friend and neighbor of her father. Before her marriage to Henry, Eliza had lived with Mary and her husband. Mary spoke in support for her friend:

When it was John Brotherson’s turn, he stated that when the will was made Henry was asked if his brother should be called to sign as a witness to his will. His response was a (negative) shake of his head. When the will was read back to him, he said that it was as he wished it, and then he smiled.

Peter Saunders next offered the first testimony concerning the break in the relationship between Henry and Eliza. Saunders and Henry Moore had visited the Vrooman farm in early 1842 to purchase property that Henry and his brother owned in Glenville. When asked about having Eliza sign the deed, Henry then said she had left him and that she would never be back “as long as I have strength to keep her out.” He also stated that she was extravagant and would have more company than he could afford. Sanders also testified that Henry stated that she had abused him when he undertook to correct her children.

John Anderson was another neighbor who testified about Henry’s relationship with his brother John. Anderson was a close friend of Henry’s brother and had once been asked by him to help “settle a difficulty” between him and his brother after Henry and Eliza had married. Anderson also heard Henry say that his wife had gone away and that he “never wanted to see her in the house again, she or none of her tribe.”

But Elizabeth Odell, the daughter of Philip Brotherson’s second wife Alice told a different story. She recalled that it was Christmas week in 1841 that Eliza moved back to Blue Corners. Once Eliza had returned to Henry, Elizabeth visited and was told by Henry that he and Eliza “live as happily as two birds together.”

Next, Alletta, daughter of Philip Brotherson and his second wife Alice, told of Eliza’s care of Henry during the final months of his life. During her visits to their home, she saw Eliza “nurse him, procure his victuals for him & take care of him as well as any baby.”  In her testimony Mary Mott supported this claim, even telling that after the funeral John had said that he thought Eliza must be “very much fatigued as she had been very faithful & kind to my brother & had nursed him and taken good care of him during his sickness.”

The hearing ended with Henry’s will being admitted to probate and filed. Apparently, the judge sided with those that testified that the couple’s marriage had conformed to the old adage that “All is well that ends well.”

The source of material and illustration for this article is Saratoga County Wills, Volume 12, pages 425 through 449. Illustration: the last will and testament of Henry A. Vrooman.

Dave Waite has had a lifelong interest in New York State and Adirondack history. His research has been published by historical organizations across upstate New York. His most recent article “With Energy and Success, Thorp & Sprague’s Mohawk Valley Stage Line,” is featured in the Winter 2021 New York Archives Magazine. David’s email is davewaitefinearts@gmail.com.