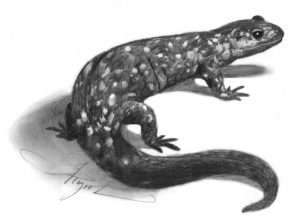 On a warm, rainy April night a few years ago, I drove up our muddy, rutted dirt road through the mist, steering around the wood frogs hopping across the road. As I approached the vernal pool, there were more frogs in the road, so I parked to avoid hitting them and walked the rest of the way.

There were still patches of snow in the woods and two-thirds of the pool was covered with a floating sheet of ice. Hundreds of wood frogs, which had come here to mate and lay eggs, were swimming in the water and stationed at regular intervals on top of the ice, eyes glowing in the light of my headlamp. The males were calling to attract females, generating a cacophony of quack-like sounds.

I walked slowly around the pool, aiming my headlamp at the ground. Soon I caught the movement of a dark, purple-gray salamander about four inches long, glistening with moisture as it slithered over moss towards the pool. Like the frogs, it had responded to the warm spring rain and arisen from its underground burrow, driven by an instinctual urge to breed.

The salamander froze when I shined my light on it, allowing me to take a flash photo. Later, when I examined the photo on my computer, I noticed tiny, sky blue dots on the animal’s sides and legs. This salamander was different from any I’d seen before. I found three more salamanders with similar coloration in the woods near the pool and another three crawling across the road.

Hybrid salamanders like the ones I discovered are all female, members of a unisexual line that reproduces primarily by cloning. In a process called gynogenesis, the female salamanders use spermatophores (sperm packets) deposited in vernal pools by male blue-spotted or Jefferson’s salamanders only to stimulate egg development; the females do not incorporate genetic material from the males into the eggs. The hybrid salamanders also have an extra set of chromosomes in their DNA. Most animals, including humans, have two pairs of chromosomes (diploid), but these unusual salamanders may have three or four pairs (triploid or tetraploid).

A 2018 study by Ohio State researchers led by Rob Denton traced the genetic history of hybrid salamanders back 3.4 million years and found that the females had essentially cloned themselves for millions of years, with short periods where they incorporated male sperm into their eggs. This occasional sexual reproduction was apparently enough to provide sufficient genetic diversity to maintain the health of the population. According to Denton in Science Daily, most asexual lineages die out after 100,000 years, but this one has been around for 5 million years. “These salamanders are just sort of plodding through evolutionary time doing strange and surprising things,” said Denton. “Surprisingly, it doesn’t look like they’re suffering any ill genetic effects.”

On trips to our local vernal pool in other springs, I’ve seen stout gray salamanders with tiny blue flecks. Andrews has identified them as Jefferson’s hybrids, females with more genes from the Jefferson’s salamander than from the blue-spotted species. This hybrid tends to be found in vernal pools with less acidic soils.

Despite their complicated genetics, the salamanders I’ve found have a similar life history to the familiar spotted salamander with its large yellow dots, which uses the same pool. After laying jelly-like egg masses, usually attached to an underwater twig, the hybrid salamanders leave the pool on another damp night and return to underground haunts. After a few weeks, their eggs hatch into larvae with fin-like tails and feathery, external gills. The larvae feed on small animals that live in the vernal pool such as fairy shrimp and mosquito larvae. After a few months – if the pool does not dry up too soon, and if they are not caught by predators such as owls or raccoons – they will develop legs, lose their gills, and emerge onto land. The young salamanders will disperse into the forest, continuing an ancient cycle.