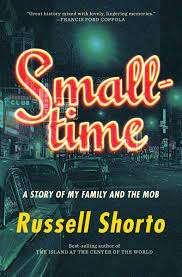 In a recent conversation at the NYS Writers Institute, Paul Grondahl interviews historian Russell Shorto, the best-selling author of Island at the Center of the World: The Epic Story of Dutch Manhattan & The Forgotten Colony That Shaped America, Amsterdam, and Revolution Song, and a contributing writer at the New York Times Magazine.

For his seventh book, the main topic of this conversation, Shorto has taken on a completely different challenge. In Smalltime: A Story of My Family and the Mob, Shorto uses his skills as a historian and a prose stylist to produce an absorbing personal story about his namesake, his grandfather, Russell Shorto, a minor-league mobster in Johnstown, Pennsylvania.

You can listen to the conversation on the Writers Institute’s YouTube page here.