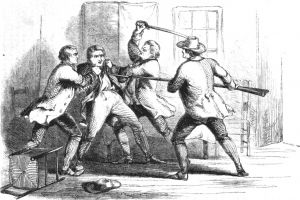 On April Fool’s Day, April 1st, 1782, Joe Bettys was hanged. It was, as was the custom, a public spectacle in Albany where the notorious traitor had been taken for his trial and sentencing.

On the scaffold, just after a noose was tied around his neck, he jumped to his death, thereby depriving his executioners from carrying out his sentence.

Today, on Route 50 in Saratoga County (about a mile north of the Lakehill Road and Route 50 intersection), sits a stone house dating back into the 1700s. The house, which doubled as a tavern, was owned by the Bettys family. The father and husband of the household was a Loyalist, supporting the British side when the Revolution began.  His son Joe was on the opposite side – a rebel. One can only imagine the arguments that must have occurred between the two. 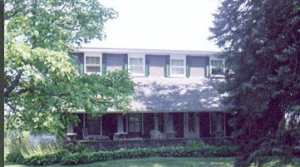 Eventually, Joe joined the rebels. He eventually found himself assigned to Benedict Arnold fleet on Lake Champlain, where he was reported to have fought bravely in the Battle of Valcour Island.  He is said to have fought on after all his officers had been killed or wounded by taking charge himself.

Because of all he had done in numerous battles, he felt he should be commended for his service and given an advancement in rank. Apparently angered that he was not, he either deserted, or some sources say he was captured, went to Canada and joined the British. He then started carrying messages behind the lines. For many years, Bettys delivered information to the British until finally he was caught. Sentenced to die, he was instead pardoned and told to end his treasonous activities.

A few years later however, he was found in present-day Clifton Park and while being questioned quickly threw a piece of paper in a fire — a paper which turned out to be information intended for the British. He was taken to Albany, tried, convicted, and hanged.

One can only imagine the horror of his family and their reaction to what their family member had done. Recently, the town of Ballston in conjunction with the Pomeroy Foundation, erected a historic marker in Hillside Cemetery in Burnt Hills to the memory of Joe Betty’s family.

The marker is inscribed: “Bettys Family. Joseph died 1804 and Abigail died 1791. Local innkeepers and unfortunate parents of Joseph, convicted traitor and spy who was hung in 1782.”

Illustrations: Above, The Capture of Joe Bettys from United States Magazine, 1857; and below, Bettys Tavern on Route 50 in Burnt Hills (author photo).