In 2011, the nonprofit Gotham Whale recorded just five humpbacks spotted off New York City. Since then, the number has soared. By 2018, sightings had jumped to 272. Less than a year later, 377 whales of different species were observed.

First, the water conditions in the NYC bay area are improving. Twenty years ago, the waters around New York City were some of the most polluted in the world — a toxic stew of chemicals and garbage. Thanks to successful environmental policies, whales are back in the Big Apple.

According to NYC’s “State of the Harbor” report, the water is the cleanest it has been in decades. Secondly, there’s a lot more food for humpback whales around. Menhaden, tiny silver fish consumed by humans mostly as fish oil pills, are a primary food source for humpback whales. When the allowed Atlantic catch was drastically cut back in 2012, their number increased quickly. Since then, researchers say, 300 million more of these fish are inhabiting the Atlantic Coast.

This isn’t the first time whales enjoyed our waters.

When first settlers arrived, they found a garden of delights. Mark Kurlansky, in The Big Oyster, writes “The harbor was crowded with bass, cod, weakfish, herring, mackerel, blackfish, as well as frolicking, diving mammals – whales, porpoises, and seals.” And, similarly, the authors of  Mannahatta tell us that New York “was acclaimed by early settlers for its biological diversity and fertility: home to bears, wolves, songbirds, and salamanders, with clear, clean waters jumping with fish, and porpoises and whales in the harbor.”  Two whales were spotted at Albany in 1647.

It was said that in early colonial times, there were so many large critters in the harbor that you could walk from Manhattan to New Jersey on their backs, without wetting your feet.

Whaling was not unknown. Basques from France and Spain had captured whales at sea for centuries – even, it seems, off the coast of Newfoundland long before Europeans created colonies in North America. Native Americans caught whales as well but in shallow waters off the coast. They were known as “drift whales” and European new-comers joined with Native Americans in this practice.

When we think of whaling in American history, we think of New England’s ports, whalers on Cape Cod Bay established a thriving shore fishery in Wellfleet – and this industry would grow to be world famous. But the first organized effort by colonists to hunt drift whales apparently took place in Southampton, Long Island, in March 1644.

Over the next 30 years this developed into shore-whaling operations, where small boats were launched when whales were sighted offshore. By 1672 the colonists and their Native American neighbors were working together to hunt whales along the coast from small sailing vessels.

By the early 18th century, this phase of the whaling industry had passed. Fewer whales were found close to shore, so whalers turned to larger boats to take them farther off the coast for the hunt. When we think of whaling in American history, we think of New England’s ports. Whalers on Cape Cod much more capital was required to build and man larger ships, taking a much long time at sea. Whaling became a much more specialized industry. Nantucket flourished, but in the early 19th century, several communities on the south shore of Long Island and, perhaps more surprising, along the Hudson River also became major whaling ports. The most famous were Sag Harbor and Hudson.

Sag Harbor became one of the largest whaling ports in the country. Its whaling industry built on the Southampton drift-whale and shore-whaling trades. In 1785 business partners Benjamin Huntting and Stephen Howell sent two ships down to the coast of Brazil that returned with about 350 barrels of oil each. It wasn’t much – just a few years later ships would be coming home with 2,000 or even 2,500 barrels – but it was enough. Sag Harbor was on her way and for the next 50 years, enjoyed good times, or “greasy luck” as the whalemen would say. Whales were plentiful and there was no reason to even leave the Atlantic. 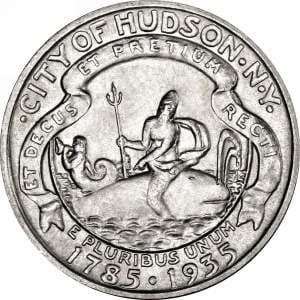 Hudson became an important whaling center because several Nantucketers searched for a harbor that would be safe from British intrusions. Two prosperous Nantucket-born Quaker brothers named Seth and Thomas Jenkins, decided to seek promising dockage farther west, off the coast, and began exploring likely sites along the Hudson River: first in Manhattan, then in Poughkeepsie. In 1783, they found the site of present-day Hudson, then known as Claverack Landing and, incorporating as the Nantucket Navigators, created a deep water port, too far inland for hit-and-run tactics by British gunboats. Thirty whaling families from Nantucket, Providence, Martha’s Vineyard and Newport soon joined the Jenkinses, calling themselves the Proprietors.

Within two years there were enough settlers from the seacoast to incorporate as a city, only the third within New York State, and rename it after the river’s Dutch discoverer. Their early experiment in urban planning succeeded so well that the Proprietors proceeded to lay out all the land between the bays in an even, logical grid of streets, with forethought as to where all the trades ancillary to shipping would best be located.

Soon, European visitors described Hudson as a cosmopolitan, thriving commercial city. It had 2,500 residents by 1790, 4,000 by 1800. And whaling was definitely the driving force. In 1797, a ship called the American Hero brought back the largest cargo of sperm whale oil in American history. The British again blockaded US shipping traffic during the War of 1812, causing a downturn in the American whaling industry that put the Proprietors’ pioneering firm out of business. But the City of Hudson had developed its own economic momentum by then, no longer dependent upon a single industry. And whaling was revived by a newly formed Hudson Whaling Company beginning in 1829. 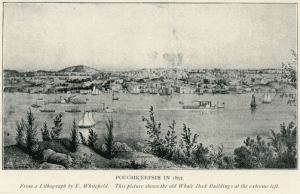 Sag Harbor’s last whaler, the brig Myra, sailed in 1871. She would never return, being condemned in Barbados in 1874, too leaky and worn to safely to return. With her demise, Sag Harbor’s whaling industry came to an end. Her wharves slowly went to rot. The boat shops and cooperages and oil yards closed. Her streets grew quiet, no longer teeming with hardy, boisterous sailors. It was, as one local resident wrote in 1872, “Dozeville.” One last factoid: A former whaler, Captain William Freeman, bought a dumpy building in 1876, built a porch, installed a bar and dining room, and named it The American Hotel or “The American House.”

We hope the return of the whales to New York will not be just a spring break visit, and that they will remain our neighbors. Of course there are issues. For one, whales have some competition for their favorite food: Commercial fishing operations along the eastern seaboard are targeting menhaden on an industrial scale, turning the fish into animal feed and human supplements.

In addition, New York City is the busiest port on the eastern seaboard, with as many as 20 or more ships lining up to drop anchor and unload their cargo at any given time. This means collisions with whales—sometimes fatal—do happen. Some thrity fatal collisions have occurred in New York and New Jersey since 2016. Still, so far, so good. Whales are back!

This article was written by Stephen Blank and provided by the Roosevelt Island Historical Society.