Cornell Lab of Ornithology scientists have been tracking the effects House Finch eye disease for more than 25 years. The disease causes red, swollen, watery, or crusty eyes. Afflicted birds can recover, but may die because they cannot see well enough to find food or avoid predators.

The latest analyses, based on the observations of Project FeederWatch participants from eight Northeast states, addresses the long-term impact of the disease on House Finch populations and points to the role of the finch immune system in the bird vs. bacteria battle. 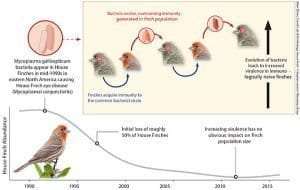 The study’s authors believe that acquired immunity — when the immune system creates antibodies in response to an infection — is actually driving the arms race between the birds and the bacteria. They say imperfect acquired immunity, just like imperfect vaccines against human pathogens, creates the conditions needed to favor the proliferation of new strains of the bacteria that can overcome immunity acquired against existing strains of bacteria.

Immunity can also develop through genetic changes to the House Finches, but this would be a relatively slow process, requiring multiple years for genetically novel and resistant finches to become widespread. In contrast, genetic changes to the bacteria can proliferate within hours — so fast that populations of House Finches can’t possibly evolve a defense quickly enough. 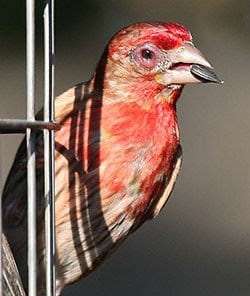 The finch eye disease dynamic has parallels to human health and the use of vaccines to give people acquired immunity to diseases. Here also, imperfect immunity — vaccines that do not provide perfect protection — are believed to accelerate the spread of new strains of pathogens against which vaccines are ineffective.

In the House Finch vs. bacteria arms race, so far it’s a draw — and the battle rages on.

The study’s findings are published in the Journal of Animal Ecology.

Read more about birds in the New York Almanack here.