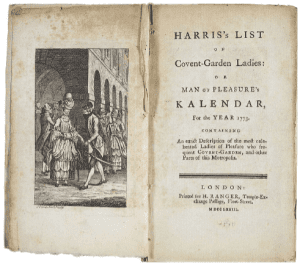 Throughout the nineteenth century, prostitution was rife in American cities. In 1820 there were an estimated two hundred brothels in New York, growing to more than six hundred after the Civil War. By the early 1840s the city was the nation’s whoring capital, its own Gomorrah.

Most houses of assignation before the Civil War were owned and controlled by women. Some madams made spectacular careers, nobody more so than Fanny White whose Mercer Street brothel was, from 1851 onward, a meeting place for Congressmen, dignitaries and diplomats – a Manhattan whoreocracy.

Despite moral indignation and restrictive legislation, the commodification of sexuality generated massive profits and opened up a market-driven trade, especially after the Civil War when men began to take control of brothels. In the history of commercialized sex, publishers played a brief but significant part.

In mid-nineteenth century New York prostitution was visible in the western lower wards where posh brothels stood adjacent to private dwellings; and in the crowded eastern wards where sex was sold in tenement rooms. Streetwalkers cruised Broadway; sex workers claimed seats in the city’s theaters.

Manhattan’s red-light districts were lightly policed, and encompassed bribe-paying brothels, bars, and gambling dens. Upright crusaders referred to them as Satan’s Circuses. The disparity between moral rage against and casual acceptance of prostitution remains one of the puzzling contradictions of the age.

During the early 1840s the public’s awareness of the city’s underbelly was raised by the publication of a number of weekly newspapers. The Flash, the Whip, the Rake, Libertine (a few short-lived papers of the style were published upstate) aimed to entertain its readers with “scandal” stories. Male readers were referred to as “sporting men” or “pleasure seekers” (the phrase is bound to be British, but its origin has not be traced so far). The papers were sold openly at newsstands and available in saloons, hotels, barbershops, and theaters. For the first time, editors mentioned brothels by name and provided tour guides to the city’s red-light districts.

Out of these short-lived newspapers developed another sort of publication, that of the Gentleman’s Directory. Tracing the history of the genre demands a journey back in time and a visit to another City of Sin. The word “flash” stems from eighteenth century slang and was initially associated with London thieves and prostitutes. Later in the century it included connotations of vulgarity or showiness. By the nineteenth century it also implied being smart. Literature flashed first in London.

Covent Garden was the capital’s hedonistic heart, attracting actors, poets and pimps. Its main establishments were the Shakespeare’s Head tavern and the Bedford Coffee House where at some time or another Samuel Johnson, David Garrick, or Tobias Smollett would enjoy a drink with friends. Covent Garden was an inspiration to them, an incubator of creativity.

Its darker side was outlined by Henry Fielding in his novel Jonathan Wild (1743) where he points to “eating-houses in Covent Garden, where female flesh is … served up to the greedy appetites of young gentlemen.” James Boswell was one of those who looked for young ladies in the area. He paid the penalty. The author suffered several bouts of syphilis and probably died as a result of the infection.

There survives a telling record of Covent Garden’s carnal temptations thanks to a Dublin-born linen draper named Samuel Derrick. In 1751 he left Ireland and settled in Covent Garden to commit himself to literature and the stage. A lover of wine and women, a lousy poet and poor actor, his debts accumulated. Enter Jack Harris, waiter at the Shakespeare’s Head and self-proclaimed “Pimp-General of All England.”

Harris kept a handwritten list of over four hundred names of the capital’s “votaries of Venus.” He made note of their addresses, biographical details, physical characteristics, specialized services, and charges. Pimp and (failed) poet agreed on publication. Derrick turned Harris’s ledger into an entertaining chronicle of women walking Covent Garden’s Piazza. Its success was overwhelming. 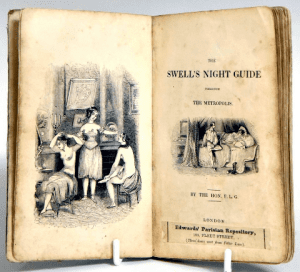 The annual List of Covent Garden Ladies appeared from 1757 to 1795 and is believed to have sold over a quarter of a million copies during that period. The record was initially flogged in local taverns and brothels, before becoming widely available. Such was the public anticipation that its publisher H. Ranger of Temple Bar, Fleet Street, started advertising Harris’s Lists in the newspapers. As “ranger” was a slang word for philanderer at the time, it was evident that the publisher wished to remain anonymous.

It proved to be a sensible precaution as Jack Harris was arrested in 1758. Derrick continued to edit the list until his death in 1769. Publication continued although the authors of later lists are unknown. Work was discontinued in 1795 when a group of social critics demanded the prosecution of those responsible for its publication, but a precedent had been set.

By the 1830s the list was replaced by “travelogues” that were based on similar pattern of information. Swell’s Night Guides were popular amongst “green” newcomers to London who were anxious about navigating the urban environment. Such guidebooks included “flash” dictionaries of slang and offered advice on how to keep oneself safe from harm or disease during a night on the town.

Publishers teamed up with suppliers of French letters (condoms), tonics and salves by advertising their products. The guides were an odd mixture of hedonism, commercialism, and public health awareness. As syphilis was rapidly becoming an urban scourge, the editor’s warning seemed to be: have fun but stay safe and protected. In New York, a similar message was rolled out. 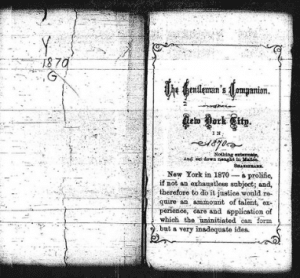 Towards the mid-nineteenth century, the number of young newcomers in New York City grew rapidly, creating a “bachelor subculture” of unattached men. Before leaving their rural homes, they were most likely warned to steer clear of urban temptations. The flash press offered these sporting men alternative guidance, steering them straight to the city’s hot spots of vice.

In 1870 an anonymous fifty-five page booklet appeared entitled The Gentleman’s Directory, ‘A Vest Pocket Guide to Brothels in 19th-Century New York for Gentlemen on the Go.’  The manual lists a range of Manhattan’s brothels. Of the 150 establishments included, forty-nine brothels were located in Satan’s Circle, later the tenderloin district. In an established tradition of sham moral concern, the booklet purported to locate bordellos “so that the reader may know to avoid them.”

Starting from the southern end of Manhattan, that same reader is escorted to brothels ranging from modest boarding houses to mansions with grand interiors and supplied with info on services rendered. There are warnings too. Joe Fisher’s boarding house at 105 West 27th Street is rated as second class, the landlady being “as sour as her wine.” 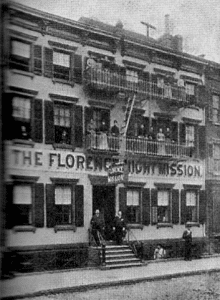 Kate Woods was a well-known madam who had managed brothels throughout the city. In the 1870s she operated Hotel De Wood at 105 West 25th Street, a richly furnished brownstone house with immense mirrors and a gallery of oil paintings. Kate presented “three young ladies of rare personal attractions” to a patronage of foreign dignitaries. The Directory rates the house the best amongst upscale 25th Street brothels.

Woods later opened the opulent House of All Nations which was renowned for housing prostitutes from Europe, Asia, Africa, and South America. Each room was decorated with furnishings from the resident lady’s native country. To its visitors, the idea of travel gained an entirely new meaning. France was a particularly popular destination.

With many services on offer, a division of labor was established whereby different houses catered to individual tastes and preferences. Sarah Sweet on Church Street advertised her ‘Creole’ women; Rebecca Weyman on Mott Street worked with “ropes and braces;” and Louisa and Charles Kanth ran their business “on the German order” – he tended the bar and she oversaw her sex workers. 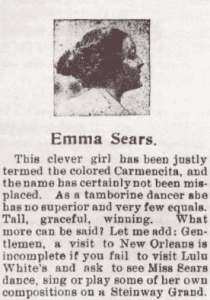 Other cities published their own directories. Basin Street in New Orleans lies close to the French Quarter. Industrialization had turned what was once a fine residential street into a seedy passage fronting Storyville’s red light district. The name refers to alderman Sidney Story who penned the legislation limiting whoredom to a part of town where the practice could be monitored.

With few work opportunities for women, prostitution was rife in the city. Many young women worked in “cribs,” tiny rooms rented from pimping landlords. Their clients, mostly sailors, paid for services in loose change or “crib-nickels.” The lucky ones made their way to the bordellos of Basin Street that catered for well-heeled clients. With a main railway station nearby, business boomed. 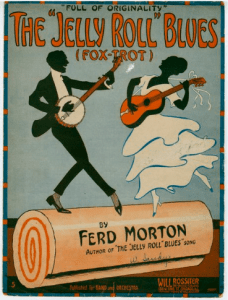 After campaigns by moral crusaders and health concerns amongst the military, Storyville was closed down in 1917. Almost all buildings were demolished in the 1930s, including some grand old mansions along Basin Street. Local authorities wished to blot the notorious locality from memory.

Storyville deserves its place in the city’s musical history. Various brothels offered musical delight to their clients, supplying jobs to young talent. One of the district’s finest pianists was Ferdinand Joseph La Mothe, better known as Jelly Roll Morton. At the age of fourteen, he began performing in a ‘sporting house.’ His B-flat foxtrot ‘Original Jelly Roll Blues’ was published as sheet music for solo piano in 1915 by Will Rossiter in Chicago. It is considered the earliest publication of a jazz composition.

Illustrations, from above: Harris’s List, frontispiece and title page of 1773 edition; Swell’s Night Guide Through the Metropolis (1841) by The Hon. F.L. G., London; A Vest Pocket Guide to Brothels in 19th-Century New York for Gentlemen on the Go, [New York, 1870] (The New York-Historical Society); a ‘Blue Book’ listing aimed at male visitors to New Orleans; the Florence Night Mission in Bleecker Street (near Mott Street) aimed to help ‘fallen’ women in the area (1883); and Jelly Roll Morton, Jelly Roll Blues. Chicago: Will Rossiter, 1915.