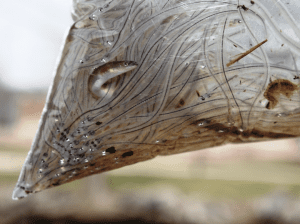 All along the Hudson River estuary, teachers, students, and local residents will be donning waders and venturing into tributary streams to participate in the New York State Department of Environmental Conservation’s (DEC) ongoing research on migrating juvenile American eels (Anguilla rostrata).

Now in its 14th year, the project was initiated by the Hudson River Estuary Program and Hudson River National Estuarine Research Reserve to gather data for multi-state management plans for eel conservation. Eel collection takes place at most sites daily from early April through mid-May. Since the project began, volunteers have caught, counted, and released more than one million juvenile eels into upstream habitat.

This spring, students, teachers, local residents, and DEC staff and partner organizations will monitor glass eels at 10 sites on the Hudson River from New York Harbor to the Capital Region.

American eels have one of the most unusual life cycles of any fish. The eels are hatched in the Sargasso Sea north of Puerto Rico, and every spring arrive in estuaries like the Hudson River as translucent, two-inch long “glass eels.”

DEC and students check 10-foot, cone-shaped nets (fyke nets) specifically designed to catch these small eels during this life stage. Student researchers then count and release the glass eels back into the water and record environmental data on temperature and tides. Most of the eels are released above dams, waterfalls, and other barriers so that the eels have better access to habitat. Eels will live in freshwater rivers and streams and for up to 30 years before returning to the sea to spawn.

For more information on the project, visit DEC’s website.