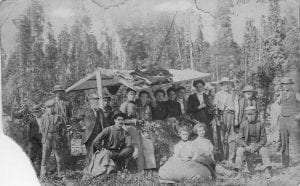 In the late 1800s Central New York grew eighty percent of the hops in the United States. A number of factors brought a swift end to the industry there around 1920, but that once great industry is now making a comeback.

Madison, Oneida, Otsego, and Schoharie counties led hop production during its “Golden Age.” In 1890, the small independent farms of New York State grew 40,000 acres, and shipped 3 million pounds of hops by canal and railroad, supplying breweries across the United States and around the world.

The Oneida County History Center will host “Hops: The Birth, Death and Rebirth of a Central New York Industry,” a virtual presentation set for Wednesday, April 14th at 6:30 pm. In this presentation Madison County Historian Matthew Urtz will discuss the rise and fall of the historic hop industry, and Chad Meigs, founder of The Bineyard hop farm in Cazenovia, will share his adventures in modern hop farming.

The recent growth of craft breweries in New York has mirrored the phenomenal growth across the country. There were fewer than 50 New York breweries 20 years ago, and more than 300 now. Many want locally grown hops. A few entrepreneurial farmers are bringing back the industry to its roots. Chad Meigs will share his work of running a commercial hop yard and processing service since 2013.

Matthew Urtz was appointed the Madison County Historian in April of 2010. He serves on the Cabinet of Freedom for the National Abolition Hall of Fame and Museum, on the Board of Directors for the Preservation Association of Central New York. Urtz’s articles have been published in multiple local and regional newspapers and magazines.

The event is free and open to the public. Advanced registration is required and can be completed online. For more information contact the Oneida County History Center at (315) 735-3642 or visit their website.

Photo of hop pickers with a load ready for processing, Waterville, NY provdied.