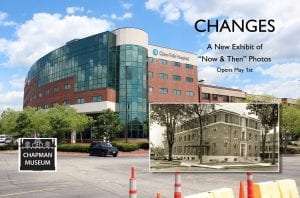 The Chapman Museum in Glens Falls has announced Glens Falls: CHANGES: “Now & Then” Photos of Glens Falls & Queensbury, a new exhibit set to open on Saturday, May 1st.

Organized by researchers Robert Bayle and Andrea Matte, Glens Falls: CHANGES tells the stories of “what came before.” The exhibit runs through September 2021.

Bob Bayle and Andrea Matte have assembled thirty-six sets of photographs of area buildings that tell the story of what shaped Glens Falls’ present landscape. In some cases, buildings received a facelift. In others, they were demolished to make way for something new. They range from present day Cool Arena and Centennial Circle in central Glens Falls to Mount Royal Shopping Center and Sweet Basil Restaurant on Route 9 in Queensbury. Along with the photos will be information garnered through their extensive research.

For example, the idea for a Glens Falls Hospital, built specifically for that purpose, was raised by a group of doctors in 1897. When the concept was first being discussed, Solomon Parks offered his home to become the new hospital. The building required extensive renovations that were designed by local architect E. B. Potter. After about ten years, a new hospital building was added, and the original structure became a home for the hospital’s nursing school. Over the years, many changes were made to the hospital in response to increased demand and growth in services. An east wing was added in 1962, the west tower in 1976, the Pruyn Pavilion in 1993, and the Northwest Tower in 2005.

The Chapman Museum is located at 348 Glens Street, Glens Falls, and is open Tuesday through Saturday, 10 am to 4 pm. Reservations are required and can be completed by calling (518) 793-2826. For more information visit the Chapman Museum’s website.