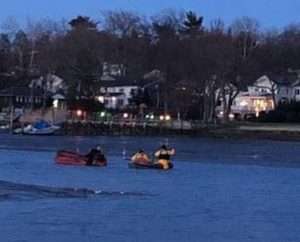 On March 30th, NYS Environmental Conservation Officers (ECOs) Macropoulos and Small received reports of a dolphin stranded in Manhasset Bay, Long Island Sound, Nassau County. They reported that when they arrived, they met with Nassau County Police, already on scene along with the Manhasset Lakeview, Great Neck, and Port Washington fire departments.

The New York Marine Rescue Center (NYMRC) was responding and requested ECO assistance in getting a better look at the dolphin to determine its condition.

With help from the three fire departments on scene, ECO Macropoulos geared up in an ice suit and went into the bay while ECO Small remained on shore to communicate with NYMRC. ECO Macropoulos determined the marine mammal was a Common Dolphin showing signs of illness. NYMRC arrived on scene and following instructions from the National Oceanic and Atmospheric Administration, and directed responders to reassess the situation the next morning.

At first light on March 31st, ECO Small observed the dolphin, now closer to shore. The dolphin was later determined to be deceased and DEC transported it to the Atlantic Marine Conservation Society for a necropsy.