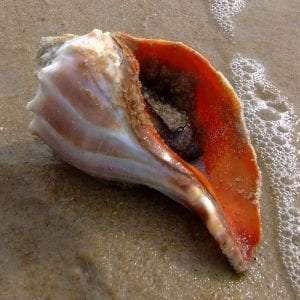 The New York State Department of Environmental Conservation (DEC) has announced proposed changes to whelk harvesting regulations in New York’s Marine and Coastal District. DEC is seeking to adopt a minimum size limit for whelk to protect immature females in the population and increase their potential to reach reproductive maturity. The proposal is available for public comment until June 21, 2021.

Current management measures in place for both commercial and recreational whelk harvest are limited. There are no minimum size limits, no daily trip limit, no fishing season, and no gear rules. The recreational bag limit for whelk is 24 whelk per person, per day; no recreational permit is required.

DEC’s proposed regulation changes include implementing a minimum size limit of 5½ inches in length or three inches in width for the harvest of channel and knobbed whelk. The rule making would also require the use of bait bags in whelk traps and adopt gear and reporting regulations consistent with current rules for crab and lobster fisheries.

Similar minimum size limits for whelk are in place for all states from Massachusetts to Virginia, with the exception of New York and Connecticut. DEC is coordinating with the Connecticut Department of Energy and Environmental Protection to adopt similar whelk rules for 2021, which would include the same minimum size limit. Consistent measures in the two states are expected to alleviate pressure and competition between commercial harvesters from both New York and Connecticut in the Long Island Sound.

Research on whelk populations in and around New York indicate females do not begin to mature until they reach the proposed minimum size limit. Long-term harvest of immature females will decrease the population’s spawning potential and increase the risk of the population not being able to sustain itself. Whelk length is easier to measure compared to width, but the tip of the whelk shell can often break causing legally harvested whelk to measure below the minimum length limit. Shell width is less likely to be damaged but takes more time to measure. The implementation of length or width minimum size allows for an alternative measurement if the tip is broken. In addition, a three-percent allowance for undersize whelk is also being proposed.

Mandatory Use of Bait Bags

Changes to Gear and Reporting Requirements for Commercial Whelk Harvest

The proposed regulations contain gear marking and placement requirements currently required for lobster and crab permit holders using pots. Consistency of gear markings and placement rules are hoped to enhance uniformity amongst fisheries, help prevent vandalism and lost gear, assist with enforcement, and by restricting the placement of whelk pots in designated navigation channels, increase boating safety. The proposed rule also includes a pot size limit and restrictions on hauling pots at night consistent with lobster rules. The proposal also requires the use of a sinking line if using buoys, consistent with crab regulations.

The proposed regulations and additional information are available on DEC’s website. Written comments on the proposed regulations can be sent through June 21st, 2021, to Kim McKown, New York State Department of Environmental Conservation, 205 Belle Mead Road, Suite 1, East Setauket, NY 11733, or by email to fw.marine@dec.ny.gov.