When in doubt, take a dinner break.

That was the strategy for reaching unanimity in 1888 at New York’s 18th Congressional District nominating convention.

And the strategy worked, although some of the politicians from Washington and Rensselaer counties may have eaten crow, so to speak.

In a “preliminary vote” intended to gauge support for candidates, John Adam Quackenbush, a politically active farmer and lumberman from Schaghticoke, received 27 votes, George H. Morrison, a bank cashier from Lansingburgh received 16 votes, and S. D. Louks of Hoosick 1 vote, with the votes of two towns contested, the Troy Budget reported, in an article The Granville Sentinel republished on August 31st, 1888.

So, the convention recessed for dinner.

“During the recess there was a break for Quackenbush among the Washington County delegates of five to six votes,” the paper reported.

“When the fact was ascertained, the Washington County delegates had a consultation, and sent for Mr. Morrison and advised him to withdraw and thus leave a clear field for Quackenbush, which, on learning the situation, he proudly consented to do.”

With consensus reached, it was time to return to session.

Quackenbush received 28 votes and Hughes 17, with one abstention, and then Quackenbush was unanimously nominated by voice vote.

Morrison, who was forced out of contention, received the consolation prize – the honor of making a speech.

“Among the closing doings was a gracious, graceful, lovely and appropriate address from George H. Morrison, who congratulated Mr. Quackenbush with admirable good nature, showing that no disappointment rankled in his breast on account of his defeat, and pledging his best exertions to help elect Mr. Quackenbush,” the Budget reported.

Quackenbush was a farmer and seller of farm products and lumber, according to an obituary published May 13th, 1908 in the Hudson Valley Times of Stillwater.

“For years he was the proud possessor of a herd of registered Jersey cows, in which he justly took much pride, and which were admired by the farmers for miles around.” 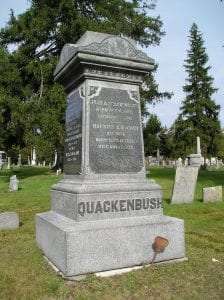 He won the 1888 general election for an open seat that was previously held for one term by a Democrat who did not seek re-election.

Quackenbush was re-elected to the House in 1890.  He secured appropriations to construct a post office at the corner of Broadway and Fourth Street in Troy, to improve conditions along the Hudson River, and to improve navigation on Lake Champlain.

He championed provisions in a tariff bill to protect the shirt and collar industry, but was defeated in his race for reelection in 1892.

“He was a man of genial disposition and large heart, and stood ever ready to assist the poor and needly,” the Hudson Valley Times eulogized Quackenbush when he died in 1908. “He was unassuming in manner, courteous to all, and liberal minded and fair.”

Illustrations: Schaghticoke in 1889 and Quackenbush’s gravestire in Elmwood Cemetery, Schaghticoke.