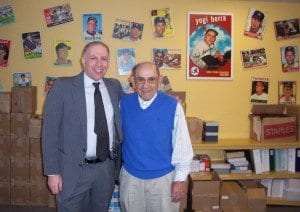 The Florida Public Library is set to host a virtual program “Baseball In America” with baseball commentator Evan Weiner, on Thursday, April 15th.

Weiner will talk about his experiences in “America’s Favorite Pastime” as a baseball correspondent/ broadcaster who spent many hours talking with Yogi, Ralph Kiner, and other baseball legends.

Evan Weiner, started his career as a sports commentator on WRKL Radio, Rockland County at the age of 15. He is among a very small number of people who cover the politics and business of sports and how that relationship affects not only sports fans but non-sports fans as well. He has a daily podcast called “The Politics of Sports Business” as well as a daily video podcast. He has been a regular on Talk Sports London and writes for The Guardian, A U.K. newspaper. He has appeared as a TV pundit on MSNBC, NewsMax, and ABC. He is the author of eight books and is a frequent college speaker. He won the 2010 Ronald Reagan Media Award from the United States Sports Academy.

This program will begin at 6:30 pm, and will be held via Zoom. Registration is required, and can be completed on the Florida Public Library website or by calling (865) 651-7659.