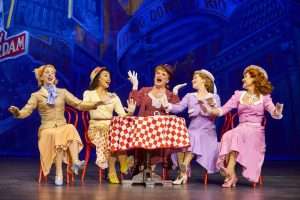 View Arts in Old Forge in partnership with By Experience is set to present the Broadway musical 42nd Street from May 12th to May 18th.

42nd Street is set in 1933, and tells the story of Peggy Sawyer, a talented young performer with stars in her eyes who gets her big break on Broadway.

Peggy arrives to New York City from her hometown of Allentown, Pennsylvania and her talent catches the eye of legendary Broadway director Julian Marsh. She gets a spot in the chorus of the musical-within-the-musical, Pretty Lady. Dorothy Brock, the classic Broadway diva and star of the show, takes a dislike to the new girl. When Dorothy is injured, Pretty Lady looks like it will have to close, unless a new girl talented enough to lead the show can be found —  Peggy Sawyer.

Filmed in 2018 at London’s Theatre Royal the production is directed by the original author of the show, Mark Bramble. This performance is full of tap dances, popular musical theatre standards (“Lullaby of Broadway,” “We’re in the Money (the gold digger’s song),” “42nd Street” and more), and ensemble production numbers.

42nd Street may be viewed from May 12th to May 18th with four time slots per day. Tickets are $15. For more information or to register for a time slot, visit View’s website.