Young Alexander and Elihu Vedder were raised in Schenectady, New York. The family had Dutch roots (their parents were cousins). The elder brother was a physician, the younger a painter. In their career choices they showed an outward-looking attitude, cherishing the challenge of foreign experiences while assimilating the riches of cultural exchange.

Born in 1624 in Amsterdam, Simon Volkertse Vedder (Veeder) was the originator of the American line of the family. Employed by the East India Company, he joined the crew of the Prince Maurice, a ship that sailed the New Netherlands route.

Simon made his home in New Amsterdam in 1652, moved to Beverwyck (Albany) two years later, and from there to Schenectady in 1662 where he was one of the first settlers (the family name remained associated with the town). He died in 1697 in Albany County, but his pioneering spirit was inherited by his descendants. 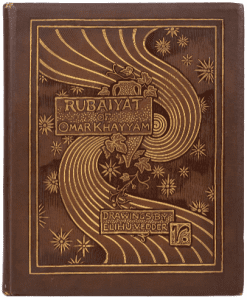 Elihu Vedder was born in February 1836 in New York. His mother supported his ambition to be an artist to which his dentist father reluctantly assented, hoping that his son would chose a more solid occupation. He received his early education at the studio of Tompkins Harrison Matteson in Shelbourne, New York.

In March 1856 he embarked for Paris where he spent eight months training with François-Édouard Picot, before traveling to Florence where he studied drawing under Raffaello Bonaiuti. Tuscany sparked his love for landscape painting; Florence inspired his passion for the Italian Renaissance. In 1860, his father cut his allowance and Elihu was forced to return home.

Back in New York, Vedder became involved with the bohemian group of artists and actors that met at Charles Pfaff’s basement “chop house” at 647 Broadway. It was there that he befriended Walt Whitman. During this period, his work was noted for its visionary style and romantic imagery. This included ‘The Lair of the Sea Serpent’ (1864), the nightmarish image of a mythical creature burrowing into a hillock on a northern Italian coastline.

Having married Caroline Rosecrans in Glen Falls in July 1869, the couple left New York to live in Rome where he became a central figure among an international group of artists. His fifty-five illustrations for Edward Fitzgerald’s translation of the Rubaiyat of Omar Khayyam (1884, published in Boston by Houghton Mifflin) created a sensation. Its financial success allowed him to buy a place on the Isle of Capri, then a haven for male aesthetes. 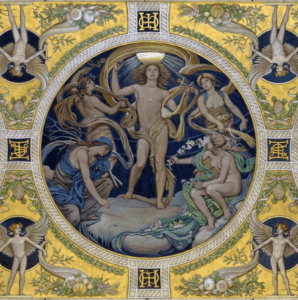 Although an expat (like Shelley and Keats, he is buried at Rome’s Cimitero Acattolico or Protestant Cemetery), Elihu exhibited his work regularly in the United States where he gained critical acclaim for his symbolic paintings with mythological subjects. In the 1880s he made several trips to New York where he pursued his interest in decorative arts by designing stained glass (mostly for Louis Comfort Tiffany) and ceramic tiles.

His mural work was also in demand. In 1896/7 he fulfilled a commission by the Library of Congress to produce a mosaic and five wall paintings symbolizing the Republic as the ideal form of government. Three years previously he had decorated the ceiling of railway magnate Collis P. Huntington’s mansion on Fifth Avenue entitled “Abundance of the Days of the Week.”

Vedder produced few still life paintings. Within his oeuvre, the 1879 “Japanese Still Life” is unique. Stylistically conventional, the choice of subject matter and the date of execution are nevertheless significant, both in a personal context and in a wider historical setting. 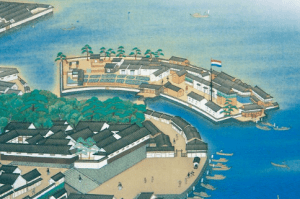 Japan’s encounter with western culture began with the arrival of Portuguese Jesuits in 1543. The first Dutch ship to arrive in Japan was the Liefde (Charity) in April 1600. When in 1639 the Tokugawa Shogunate (military dictatorship) introduced a policy of seclusion, foreign contacts were ceased except for trade with the Netherlands, an arrangement that would last for over two centuries.

Employed by the Dutch East India Company, Engelbert Kaempfer arrived in Batavia in September 1689 and was sent on as physician to Dejima (exit island), the man-made and fan-shaped Dutch base in the Bay of Nagasaki since 1641. On his death, a dossier of notes and maps was purchased by Hans Sloane who instructed his librarian to translate the documents into English. Published in 1727, Kaempfer’s History of Japan was the first wide-ranging European account of Japan.

In October 1808, the English warship Phaeton made a failed attempt to take over the Dejima base from the Dutch. The exclusion of other foreigners became even more strictly controlled. Dutch traders (a colony of twenty men) were closely supervised.

Up to the mid-nineteenth century, Japanese scholars learned Dutch to keep abreast of developments in science and medicine during isolation (known as “Rangaku” or “Dutch learning”). Trading arrangements enabled them to buy western armaments and instruments such as telescopes. The Dutch were one of Japan’s window on the world.

In 1853/4 President Millard Fillmore ordered an expedition to the Shogunate. Matthew Perry was instructed to establish political contacts and negotiate trade agreements. The goal was to force the opening of Japanese ports to American trade, if necessary through the use of gunboat diplomacy. 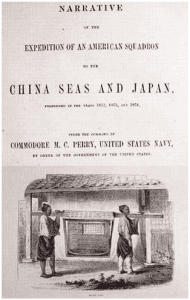 Language played a vital part in Perry’s undertaking. Dutch-born American diplomat Anton L.C. Portman served as his interpreter since the Japanese preferred to negotiate in Dutch. His Japanese counterpart was Dutch-speaking Hori Tatsunosuke. The latter acted as translator after the arrival of Perry’s fleet of four heavily armed vessels at Uraga on the entrance to Edo Bay in July 1853. The final drafts of the Kanagawa Treaty (signed on March 31, 1854) were written in English, Dutch, Chinese, and Japanese.

The success of Perry’s mission heralded the collapse of the Tokugawa Shogunate. The story of the expedition was told in 1856 by Francis L. Hawks in Narrative of the Expedition of an American Squadron to the China Seas and Japan (illustrated by the German artist Wilhelm Heine). The Meiji restoration of Imperial Rule finally opened Japan to the West. 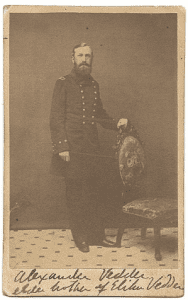 During the 1860s Japan went through a massive transition. Open to foreign trade, new products and technologies started to change Japanese socio-cultural life. One of the first outsiders to leave an eye-witness account of unfolding events was Alexander Vedder, Elihu’s elder brother.

In 1856, having failed to establish a practice in New York, Alexander accepted a medical officer’s commission in the U.S. Navy, eventually serving as a surgeon. During the Civil War he was assigned to the sloop-of-war Jamestown which was under orders to sail for Japan. Having arrived at Yokohama in July 1863, Vedder was put in charge of a small naval hospital.

Enchanted by the country and tempted by financial rewards, he resigned his commission in 1865 and set up his own practice. In January 1868 he was made physician to the Prince of Ch sh at the rapidly expanding town of Shimonoseki. Mixing with prominent statesmen of the domain, he was the only foreigner residing there. Later that year he accepted an offer from Emperor Meiji to serve as head of the Imperial Hospital near Osaka.

From close by, Vedder observed and recorded events (his journal survives) that took place during a crucial period in the nation’s political history. The Boshin War, Japan’s civil war (1868/9), had just broken out between forces of the conservative Tokugawa Shogunate and those seeking to return political power to the Imperial Court and drag Japan into the modern age.

Supporting the cause of the rebels, Vedder’s career was cut short by a paralytic attack in 1869 which led to his death in 1870. 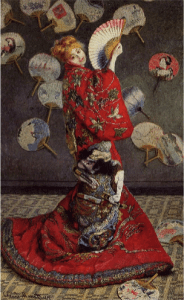 Alexander Vedder took a collector’s delight in Japanese culture and admired the beauty of oriental objets d’art. After his passing, Elihu received three trunks containing his brother’s effects, including his Japanese purchases. The objects in Vedder’s still-life painting were most likely among them. In that sense, the work is a personal tribute to the memory of his brother.

There is an intriguing wider context as well. Once Japan’s isolation was broken, large quantities of objects flooded the market. Arthur Liberty opened his East India House in London’s Regent Street in May 1875, but the craze hit Paris first. In 1862 Mme Louise Mélina Desoye started her business at 220 Rue de Rivoli which became an inspirational source of information for countless artists.

By 1867, artifacts of Japanese culture were on display for the first time at the Exposition Universelle in Paris. Five years later, art critic and collector Philippe Burty coined the term “Japonisme.” During the decade, the enthusiasm spread throughout Western pictorial art, sculpture, design, architecture, theatre, and music. Monet’s 1876 painting of his wife Camille in a Japanese costume surrounded by props was typical of the European vogue for “Japoneries.” 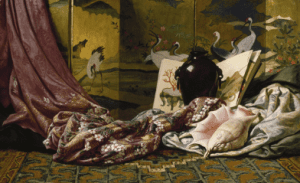 Jacques Joseph [James] Tissot had a passion for oriental art. He collected prints and textiles, incorporating them as accessories in his paintings, as well as depicting western-looking women in kimonos. During the 1870s he lived in St John’s Wood where he shared his interests with fellow London artists, among them the American-born painter James Abbott McNeill Whistler. The two had met in the Louvre when they were both students in Paris; both were among the first clients of Mme Desoye’s oriental art shop. Whistler was one of the earliest painters in Britain to incorporate Japanese elements in his work. Like Tissot, he never actually visited the country.

In America, it was not until the Philadelphia Centennial Exhibition of 1876 that Japanese art captured wide attention. By then, Japan was marching forward. The Meiji regime decided that a grand display at Philadelphia would force the world to take notice of developments. Visitors however were intrigued by the treasures of traditional culture on show in the Japanese bazaar and gardens, not by the nation’s industrial progress. Following the Exhibition, America went Japan-crazy. Elihu’s still life was an expression of the phenomenon.

Illustrations, from above: The Lair of the Sea Serpent (1864) by Elihu Vedder courtesy Museum of Fine Arts, Boston; Elihu Vedder by Rubaiyat of Omar Khayyam; Centre of Vedder’s 1893 ceiling mural at Huntington’s Fifth Avenue Mansion, known as “Abundance of the Days of the Week” courtesy Yale University Art Gallery; Dutch flag at the man-made island of Dejima in Nagasaki Bay; Francis L. Hawks, Narrative of the Expedition of an American Squadron to the China Seas and Japan (1856); Alexander Vedder in Union military uniform, c. 1861; Claude Monet, La Japonaise, 1876 (Camille Monet in Japanese outfit); and Japanese Still Life, 1879 by Elihu Vedder.