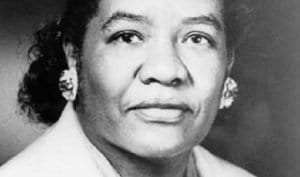 In 1956, Dr. Dorothy L. Brown became the first single woman in Tennessee to legally adopt a child. This accomplishment was one of many firsts that Dr. Brown achieved in her storied life.

Once a ward of the Troy Orphan Asylum in Troy, NY, Brown was a leader in medicine and politics who authored a failed abortion law during her time as the first African-American Representative in the Tennessee General Assembly.

This presentation explores the context in which Dr. Brown lived and worked, that ways that her early life and work informed her involvement in adoption and abortion reform efforts in the decades before Roe v. Wade, and the relevance of her work for us today.

Dr. Kori A. Graves, PhD, who will present this talk, is an Associate Professor of History at the State University of New York at Albany. A graduate of the Program in Gender and Women’s History at the University of Wisconsin-Madison, Dr. Graves’ research evaluates the significance of political and popular representations of gender, race, nation, and family.

Her book, A War Born Family: African American Adoption in the Wake of the Korean War tells the story of the first African Americans who adopted Korean children, and the ways their efforts revealed the contested nature of adoptive family formation across racial and national lines in the Cold War era. Dr. Graves is also a dedicated instructor. She has won awards for teaching excellence for her courses that explore gender and women’s history, the history of marriage and family, and histories of the body, beauty and identity politics in the U.S.

Admission to the talk is $10. To become a LibertyCon2021 sponsor, click here. For more information or to register for a LibertyCon 2021 Zoom presentation, visit the Underground Railroad Education Center website.

Upcoming LibertyCon 2021 presentations include Staten Island’s Freedom Struggles and the Underground Railroad on April 24th; Documenting Racially Restrictive Covenants in Washington DC: A Primer on May 22nd; African Americans Fighting White Supremacy in the Wake of the Tulsa Massacre on June 26th; Racist Violence is as American as Cherry Pie on July 24th; Food Justice: Hunger, Child Poverty and Farming while Black on August 21st; Destined to engage and collaborate: Examining the Social/Political Dynamics of Native Americans and African Americans in the United States on September 25th; Building Community through Free Black Migration before the Civil War on October 23rd; and Native American Lives Matter on November 27th.