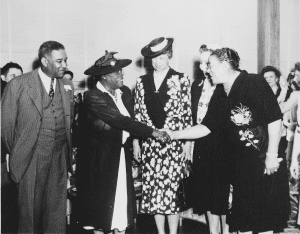 As a presidential advisor of African American Affairs during the Roosevelt administration, Mary McLeod Bethune formed the Federal Council of Negro Affairs, which would become known as the Black Cabinet.

The Black Cabinet was instrumental in creating jobs for African Americans in federal executive departments and New Deal agencies.

Bethune’s influence within the Roosevelt administration also allowed her to direct funds created by the New Deal program to Black people. Programs such as the Works Progress Administration (WPA) and National Youth Administration (NYA) were successful in employing over 300,000 African Americans during the Great Depression.

Photo of Mary McLeod Bethune, Mrs. Eleanor Roosevelt and others at the opening of Midway Hall courtesy National Archives.