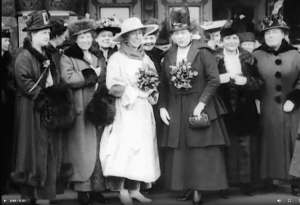 After helping to secure women the right to vote in Montana in 1914, Jeanette Rankin was the first woman to be sworn into Congress in April 1917.

More information on Jeanette Rankin can be found in the Pieces of History blog: Women can’t vote, but they can run for Congress.