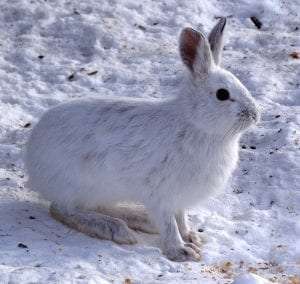 Early March is the time of the year when the snow pack in Northern New York typically reaches its greatest depth. Yet, this period produces some of the most favorable conditions for the varying hare, also known as the snowshoe rabbit, a common denizen of our dense conifer forests.

For a creature that can easily remain on the surface of the snow, a thick blanket of powder provides the varying hare with the opportunity to access vegetation that is ordinarily out of its reach. Standing upright on its powerful hind legs, this herbivore is only able to gnaw on the buds and bark of twigs that occur up to a foot above the surface on which the animal is located. Should a snow pack that is three plus feet deep develop over an area, the hare will then be able to reach the edible parts of saplings and shrubs that exist nearly four feet above the forest floor.

Along woodland edges, where the snow may drift, it is not uncommon to find evidence of this small game creature harvesting the tender parts of woody plants over five feet above the ground. Because most of the very low buds and twigs on preferred plants are eaten during the late autumn and early winter, an increasing snow pack only helps the varying hare utilize sections of vegetation that it could normally never reach.

Another significant source of food that becomes available to the varying hare as winter gradually starts coming to a close are certain sticks, limbs and tree tops that have broken off during periods of high wind. The powerful gales that accompany and follow potent winter storms are instrumental in bringing down parts, or entire trees throughout our maturing forests. While a fair percentage of these are dead and have no nutritional value, there are some that were alive when they broke from the tree and can now be eaten by this browser. The twigs and branches of white pine and hemlock are especially useful, as these pieces of forest debris contain needles that the hare will eat when it’s hungry. The twigs from healthy birches, poplars and maples are also gnawed on when they are encountered, as these species rank among those preferred by this selective eater.

Since the varying hare does not dig into the snow to uncover food that is buried, even by only a shallow layer of powder, the thaws that occur in March often expose these nutritional treasures to the hare. As it forages during the late afternoon and evening hours, the varying hare becomes a primary beneficiary of the various wind events that seem to be a more common part of our weather with each passing year. Early March is also the time when male hares begin to expand the scope of their nightly travels.

Rather than simply scour the ground within their limited home range, the males are just beginning to venture outside their immediate surroundings, not so much for food, but rather as a response to an awakening mating urge. In Northern New York, the hare’s lengthy breeding season does not begin until the very end of March, or early April. Males, however, start early exploring neighboring locations in their attempt to determine where females are residing.

Small game hunters can attest to the hare’s wanderings as winter begins to draw to a close. When pursued by a hound, a hare may occasionally fail to remain in a limited area as it does in early and mid winter. When the snowshoe rabbit is being chased by another animal, it will instinctively head to the surroundings that are most familiar to it.

Occasionally, at this time of year, it may be a patch of conifers that is a significant distance from where it was flushed. Despite it being hunted by small game sportsmen, owls, hawks, coyotes, fox, bobcats, fishers, martens and other predators, the varying hare is still able to maintain a healthy population in the dense conifer forests. Its ability to adapt to our harsh climate contributes to this success, and while the conditions of early March tend to frustrate those anxious for the arrival of spring, the deep snows, wind and thaws that typify this time of year help make the snowshoe rabbit one of our more commonly sighted wildlife residents in places like the Adirondacks.