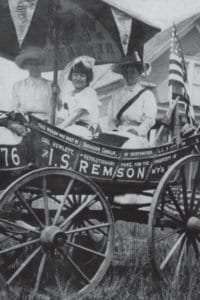 In celebration of Women’s History Month, Peace Action New York State — one of the largest peace activist groups in New York — has announced a Virtual House Party on March 19th with author and activist Marguerite Kearns, who will discuss her soon-to-be-released book, An Unfinished Revolution: Edna Buckman Kearns and the Struggle for Women’s Rights (SUNY Press; June, 2021).

Edna Buckman Kearns, a lifelong Quaker, organized with the New York State Woman Suffrage Association, campaigning in New York City and Long Island on the horse-drawn suffrage wagon, the “Spirit of 1776.” She held leadership roles in Nassau and Suffolk County suffrage clubs, and wrote for the Brooklyn Daily Eagle as a suffrage columnist and editor. She was also active in peace organizations prior to and during the First World War, including the Woman’s Peace Party, and served on the board of the Women’s International League for Peace and Freedom until 1919.

Her story, told by her granddaughter, Marguerite Kearns, is an example of how activism in one generation lays a base for future generations. Together with fellow suffrage descendant Jane Van De Bogart, great-niece of suffrage activist Elisabeth Freeman, Kearns succeeded in bringing the “Spirit of 1776” suffrage campaign wagon from a dusty garage to the permanent collection of the New York State Museum in Albany, where in 2020 it served as the centerpiece of an exhibition honoring the centennial of the passage of the 19th Amendment.

This virtual event will also feature Coline Jenkins, the great-great-granddaughter of Elizabeth Cady Stanton, who will introduce a video about Monumental Women, a project to erect the first statue of real women in New York City’s Central Park. The statue of Sojourner Truth, Susan B. Anthony, and Elizabeth Cady Stanton was unveiled in August 2020.

This program is set for Friday, March 19th, from 7 to 8:30 pm. Registration is required, tickets are $35 for general admission and $10 for students. For more information or to register, visit the Peace Action New York State website.

Marguerite Kearns’ book, An Unfinished Revolution: Edna Buckman Kearns and the Struggle for Women’s Rights, will be released by SUNY Press on June 1st, 2021.

Photo: Edna Buckman Kearns, Serena Kearns, and Irene Davison on the “Spirit of 1776” suffrage wagon on its first organizing journey from Manhattan to Long Island, July 1913.