New research reveals that a recently discovered songbird has traveled a very rare evolutionary path — a finding that challenges the typical model of how new species form. Exploration into the origins of the Iberá Seedeater of southern South America shows that a new lineage need not always arise from genetic mutations accumulated in geographic isolation over millions of years. Instead, the novel mixing and matching of existing genetic traits already found in closely related species can create something new, at a much faster pace.

The study further shows that mating behavior alone can be a powerful force, preventing a recently diverged species from co-mingling back with others that breed in the same places, eat the same food, nest at the same time, and are nearly identical genetically. These findings were published this week in the journal Science.

Study co-authors Adrián S. Di Giacomo and Cecilia Kopuchian from Centro de Ecología Aplicada del Litoral, Argentina, were the first to observe the Iberá Seedeater in 2001, and after researching its distinctiveness, they described it in scientific literature for the first time in 2016. 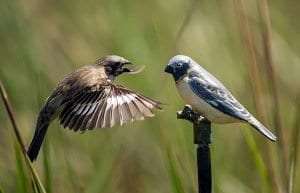 The Iberá Seedeater is primarily found on about 274,000 acres (111,000 hectares) of remote, swampy grassland in Argentina’s Iberá National Park where it lives side-by-side with the Tawny-bellied Seedeater. The Iberá Seedeater has a black throat and sand-colored belly, whereas the Tawny-bellied Seedeater has reddish cheeks, throat, breast, and belly. The researchers compared the entire genomes of the two species, finding only three narrow regions that differed. These regions contain just 12 genes, 3 of which are involved in plumage coloration.

To learn how important the color differences are to the birds themselves, lead author Sheela Turbek, a Ph.D. student at the University of Colorado, Boulder, conducted field experiments focused on their behavior. She set up painted models of Iberá and Tawny-bellied Seedeaters and played back recordings of their different songs.

The study authors think that this same reshuffling process probably underlies much of the diversity among the 12 seedeater species. There are many color combinations among all the diverging branches of seedeaters descended recently from a common ancestor. These mix-and-match combinations are likely generated when capuchino finches occasionally interbreed and form hybrids. Over time, the different seedeater species ended up with today’s variety of black, yellow, white, or red throats, paired with differently colored caps, bellies, and other key identifying features.