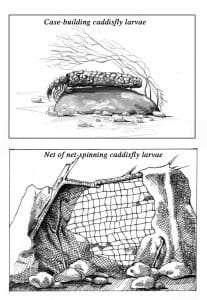 On a clear mid-winter day several years ago, my student Sarah Wakefield and I pulled on snowshoes, donned backpacks, and headed up through Smugglers’ Notch in Vermont.

Our destination was Big Spring, which rises from Mount Mansfield’s bedrock before flowing east for 100 yards and entering a culvert under Route 108. When it emerges from the culvert, the spring water joins a stream fed by surface runoff and snowmelt.

Groundwater-fed springs can flow year-round, regardless of plunging temperatures that layer thick ice on surface water streams. Spring water maintains a constant temperature, due to its long-term contact far below the surface with bedrock, and the deep sands and gravels of subterranean aquifers that are protected from the vagaries of the weather.

Springs take on the average annual air temperature of their locality, and Big Spring’s water measures 41 degrees in midwinter, just as it does in August. This constant temperature provides refuge for tiny creatures from both summer heat and the freezing cold of winter. Some species thrive only in the consistent conditions in springs, while others avoid them entirely.

Some spring-dwelling species are widespread, occurring throughout the Northeast. The cast of characters includes caddisfly larvae (Order Trichoptera): case-building, net-spinning, or free-living worm-like insects with six legs at the front end and a pair of hooks bringing up the rear.

They eat leaves, algae, filtered particles, or other invertebrates. The caddisfly Adicrophleps hitchcocki, for example, can be found at most times of the year in its perfectly squared-off green case of living moss strands in springs all along the Appalachians. Other species are endemic to one or a handful of springs; the caddisfly Apatania blacki has been recorded from just two Pennsylvania springs.

Temperature is not the only difference between spring water and surface water. Surface water draining through leaves and soil carries particles of organic material that feed blackflies and other invertebrates equipped to filter tiny morsels from water. Net-spinning caddisflies are particularly adept at dining on this movable feast of water-borne particles. Springs, however, where bedrock and subterranean sands have filtered groundwater to remove these particles, tend to lack net-spinning caddisflies that are common in other streams.

But where there’s a pattern, there tends also to be an exception, and one net-spinning caddisfly bucks the trend by specializing in springs. Parapsyche apicalis spins a far larger meshed net than do most of its cousins. This net is used more like a spider web than a filter, and Parapsyche larvae will eat any macroinvertebrate that stumbles across their threshold.

P. apicalis was one of the first macroinvertebrates that Sarah and I found during our winter expedition to Big Spring. It showed up in most samples along the length of the spring, but disappeared abruptly at the confluence with the tributary below the culvert. Patterns like this are not unusual in spring brooks. In Pennsylvania’s Mall Spring, four species found at the source disappeared downstream. And several other species occurred only downstream. Some combination of temperature and food sources likely drives these patterns.

Some theorize that rare spring-source species are “glacial relics,” cold-water species left behind when cooler conditions moved north behind retreating glaciers from the last ice age. If this is true, it begs the question: what will happen to these species in a more rapidly warming planet? When Sarah and I visited Big Spring, in the 1990s, a warming planet was less on our minds than was the need to stay warm and dry while collecting insects located under very cold water. We brought our pickled samples back to the lab for identification and quantification.

But there’s no need for microscopes or vials of alcohol to glimpse the world of spring-dwelling organisms. If you happen upon a pool of flowing water emerging from the rocks in an otherwise frozen landscape, you may well have found a spring source. By lifting a rock from the stream bed, you can see if anyone is home: debris stuck to a clean rock surface suggests a net-spinning caddisfly retreat. An inexpensive clip-on macro lens for your cell phone will allow a closer look. You can upload your photos to iNaturalist, and who knows? The community of naturalists may determine that you found Adicrophleps hitchcocki or another spring water specialist.