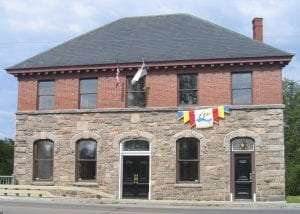 The Samuel de Champlain History Center has been awarded a grant to fund the continued digitization, cataloguing and preservation of the History Center’s 2009 Quadricentennial documents and artifacts related to the Champlain Valley’s celebrations in New York and Vermont, including books, programs, brochures and newspaper articles.

The $4,000 grant is from the Champlain Valley National Heritage Partnership (CVNHP), made through CVNHP’s Collections Grant program and funded by the New England Interstate Water Pollution Control Commission, in partnership with the Lake Champlain Basin Program.

The Samuel de Champlain History Center, established by founder and director Celine Paquette in the run-up to the 2009 Champlain Quadricentennial, is located in the Village of Champlain in the historic former First National Bank of Champlain building at 202 Elm Street.

It is a 501(c)(3) nonprofit organization that seeks to preserve the Village and Town of Champlain’s history and promote awareness of French-Canadian history in upstate New York.