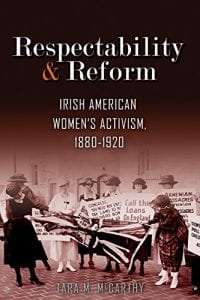 In the late nineteenth century, an era in which women were expanding the influence outside the home, Irish American women carved out unique opportunities to serve the needs of their communities. For many women, this began with a commitment to Irish nationalism. Profiles of these women suggest not only that Irish American women had a political tradition of their own but also that the diversity of the Irish American community fostered a range of priorities and approaches to activism.

In Respectability and Reform McCarthy focuses on three movements — the Irish nationalist movement, the labor movement, and the suffrage movement — to trace the development of women’s political roles. Highlighting familiar activists such as Fanny and Anna Parnell, as well as many lesser-known suffragists, McCarthy sheds light on the range of economic and social backgrounds found among the activists. She also shows that Irish American women’s commitment to social justice persisted from the Land War through the World War I era.

McCarthy is set to discuss her book during a Zoom presentation on Tuesday, March 14th at 7 pm. To register for the event, email the Irish American Heritage Museum at info@irish-us.org,