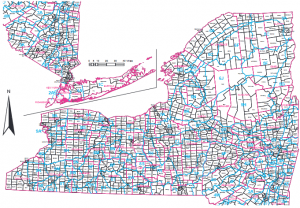 The New York State Department of Environmental Conservation (DEC) has released a draft proposal for public comment that would update regulations governing public use of the State’s vast network of Wildlife Management Areas (WMAs).

New York State has more than 120 WMAs containing nearly 250,000 acres, including 124,000 acres of forests and grasslands and 53,000 acres of wetlands. DEC’s Bureau of Wildlife manages an additional 38,000 acres of land, including Unique Areas and Multiple Use Areas, for a total of approximately 150 areas that thousands of New Yorkers visit and enjoy each year.

DEC says the Department is proposing these amendments to protect natural resources, promote public safety, and help ensure the multiple uses of New York’s WMAs remain compatible with natural resource protection and visitor interest. The proposed changes would simply existing rules for state forests, campgrounds, and other DEC lands, and codify rules and guidance already in place at many WMAs to make these rules enforceable.

DEC is accepting public comments on the draft proposal until May 24th.

The regulatory proposal is available on the DEC website for review and public comment until May 24th, 2021. Comments on the proposal should be submitted via e-mail to wildlife@dec.ny.gov or via mail to Bureau of Wildlife, NYSDEC, 625 Broadway, Albany, NY 12233-4754. Use subject line “Part 51 Regulations” for emails or letters.

Visitors to New York State’s WMAs should always be aware of the rules governing a particular area. Each WMA has a webpage that lists allowable activities and available facilities. Refer to the webpage or kiosk of each WMA for specific restrictions. For most areas, statewide hunting and fishing regulations as well as statewide WMA regulations will apply. Visit DEC’s website for Public Use of Wildlife Management Areas for a list of existing allowable and restricted activities.