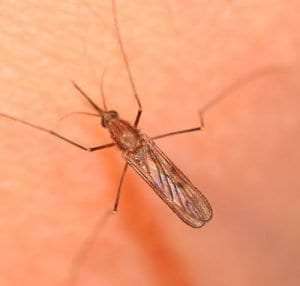 Most New Yorkers agree that one of the best aspects of winter is the total absence of pesky, flying bugs outside. Freezing temperatures and an extraordinarily dry atmosphere that would desiccate any fragile-bodied organism combine to prevent such smaller forms of life from becoming active during this harsh season in our northern climate.

Occasionally, a spider, housefly, or lady bug may be noticed throughout the winter, especially in a kitchen or a room with a large window that faces the early afternoon sun. Much to the surprise of most individuals, another bug that may be encountered while in a warm, indoor location this season is the female anopheles mosquito.

New York State supports a multitude of mosquito species, with nearly all passing the winter in the form of eggs. After their eggs have been laid during the summer, the adults eventually die. This leaves only their eggs, or in a few species, their larvae to give rise to next year’s adults.

Most mosquito egg masses tend to be laid in dry, shallow depressions on the ground that will eventually develop into small, temporary vernal pools from the melting snow pack.

The adult anopheles, however, is quite different from its relatives, for rather than perishing with the onset of cooler weather in late summer or early autumn, this delicate-bodied insect retreats to some sheltered location and slips into a deep state of dormancy, known as quiescence. Like many other bugs, the adult anopheles alters its body chemistry prior to becoming dormant so it can withstand freezing conditions.

In quiescence, the organism remains in a profound state of inactivity until environmental conditions around it become favorable again. Should a period of unseasonably warm weather occur in mid to late winter, a bug that is quiescent will likely awaken and leave the safety of its winter shelter.

Most bugs in the Adirondacks experience a dormant condition known as diapause, which is triggered by the decreasing amount of daylight, and is terminated when the length of daylight returns to a specific level. This prevents those bugs from prematurely awakening during major thaws in winter, as the anopheles sometime does.

Adult anopheles mosquitoes typically spend the winter in places that are well protected from wild swings in temperature, and have as moist a microclimate as possible. The very back chambers of a woodchuck or skunk den are such sites, as is a deep crevice in rock outcropping that extends a dozen feet below the surface. The nooks and crannies within massive piles of brush on the forest floor may also serve as a sanctuary for the anopheles mosquito. This unwelcome bug will also utilize a corner in a garage where unused household items are tightly piled, or in a basement where old clothing, or once treasured objects have been shoved into a large, uncovered bin. The anopheles may also retreat deep into a wood pile that is housed in a sheltered location.

Should a person happen to retrieve an item from the basement bin, or the pile in the garage that contains one of these mosquitoes in a state of suspended animation, and exposes it to the warmth of their home, the unnoticed insect will eventually awaken. It then doesn’t take long for it to instinctively assume that spring has come, and decide it’s now time to look for a meal of blood.

Out in the wilds, it is believed that a substantial percentage of mosquitoes succumb to the cold and dry conditions of winter; yet enough eventually survive to begin their reproductive cycle and establish a vibrant population once spring finally arrives.

If you happen to encounter a mosquito at this time of year, it is undoubtedly a female anopheles. The males, like other mosquitoes, are unable to survive the winter season. The anopheles can also be identified by the way in which it holds its body in a straight line when drawing blood from a host. Our other mosquito species characteristically bend their head down toward the host when feeding, leaving their abdomen parallel to the surface on which they have lit.

Photo: Anopheles Quadrimaculatus mosquito common to our region and the eastern half of the United States.