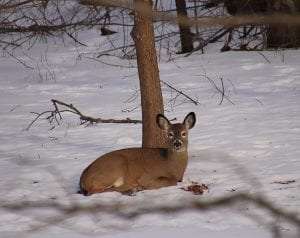 The winter season presents a series of challenges for wildlife, such as food shortages, colder temperatures and large snowfalls. Fortunately, native wildlife has developed unique physiological and behavioral traits to help them survive and thrive in New York’s cold winter climate.

A prime example is the unique shape of mammalian hair follicles, which are hollow and trap air, creating an insulating barrier to keep animals warm when temperatures drop. Beyond having a thermal coat, white-tailed deer will seek dense conifer stands or sheltered suburban environments during times of severe low temperatures and deep snow. This behavior is known as yarding. During elongated cold spells, large groups of deer may congregate together in these deer yards, so don’t be surprised when you see large herds of deer in your neighborhood as weather intensifies.

Black bears also have a very unique winter trait. It’s well-known that bears hibernate in the winter, which involves putting on additional weight during autumn and then finding a den where the bear will sleep through winter, surviving on the additional fat stores from the fall. Black bears do not truly hibernate but instead experience what is called torpor. During the torpor, the bear will experience periods of slowed heart rates and inactivity but if there is an unusual warm spell or a mild winter, the bear may become more active and leave the den to forage for more food. In the case of female bears, known as sows, they will also give birth to cubs during their winter torpor. The sows provide food and shelter for the cubs during winter, so that they are strong and healthy by the time spring arrives.

Large mammals aren’t the only critters that have unique traits, small mammals do too. Many species of rodents (ex. squirrels, chipmunks) will store food in what is known as a cache during the fall, and then utilize those caches throughout the winter. In the case of hare and ermine (a type of small weasel), their fur changes colors in the winter from a light brown to a stark white which helps them blend in with the surrounding snow and hide from predators.

Lastly, beavers will remain active throughout winter and will not only cache food like fellow rodents; they will maintain open patches of water in the surrounding areas of their den to allow periodic passage in and out. While New York winters can get frigid and the snow can pile up, rest assured that our native wildlife have developed ways to not only survive winter, but to thrive in it.

You can read more about wildlife in New York here.

Photo of whitetail deer in the snow by Fred Couse.