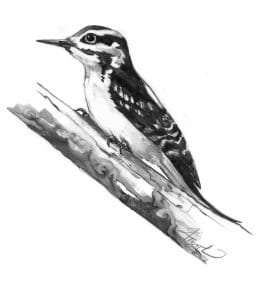 A woodpecker frequently visits our feeder, alighting on the wooden supporting post and hopping up the post to the suet. Its medium size and striking markings – black wings spotted with white, a large white patch on the back, and a red spot on the back of the head – identify the bird as a male hairy woodpecker.  The female, which also comes to our feeder, lacks the red patch on the head.

The hairy woodpecker is easy to confuse with its almost identical cousin, the downy woodpecker, another of our feeder guests. However, the hairy is about one-third larger than the downy and has a longer, sturdier bill – about the same length as its head.

Named for the long, hair-like feathers on their backs, hairy woodpeckers are common and widespread across North America. They inhabit a variety of forests, both deciduous and coniferous, especially those with mature trees, as well as parks, cemeteries, and orchards. These birds are usually year-round residents, though in some areas they move to lower elevations or the coast before winter. In fall, hairies often excavate roosting cavities in trees where they will spend cold winter nights.

The hairy woodpecker that visits our feeder inserts his beak into the suet cage and gobbles a bit of fat. He also carries suet to a hole he’s excavated in the post and stores it there for later use. He’ll take sunflower seeds from the feeder and place them into a smaller hole in the post before pecking at them to open the seeds.

Beyond feeders, these woodpeckers forage for their insect prey on the trunks and main branches of both live and dead trees and on fallen logs. Skilled climbers, their strong claws enable them to hop around trunks and even cling to the underside of branches. Stiff tail feathers prop them up as they hammer at trees with their powerful beaks. At least 75 percent of their year-round diet is insects; the remaining portion is fruit and seeds.

Hairy woodpeckers are especially fond of the larvae of bark beetles and wood-boring beetles, moth pupae in cocoons, and ants. They use several foraging strategies: gleaning insects from the bark surface and crevices, pecking off bits of bark to reach prey, and tapping and listening for the sound produced above the tunnel of a wood-boring insect. After hearing that sound, they chip and chisel the wood away to reveal the tunnel and extract the insect. One hairy woodpecker was observed excavating for an hour to obtain one larva.

Large numbers of hairies will appear in forests infested with bark beetles, or in recently-burned forests with wood-boring beetles. These woodpeckers have also helped control outbreaks of codling moths in orchards. In his Life Histories of Familiar North American Birds, ornithologist Arthur Cleveland Bent tells the story of a hairy woodpecker that made repeated visits to a potato field infested with potato beetles, and then flew to a large pine snag. After six weeks, the farmer cut the snag open and found over two bushels of potato beetles, with their heads removed, stored inside.

The hairy woodpecker’s diet and habitat overlaps with that of the downy woodpecker. A study in Quebec forests by Henri Oullet found that these two species avoid competition by foraging on different tree species, different-sized trees, and different parts of a tree. Hairies were found more frequently on tree trunks and downies on branches. Downy woodpeckers also foraged more often on small trunks (less than 4 inches in diameter), while hairies preferred larger trunks (more than 8 inches).

Scientists have wondered why hairy and downy woodpeckers look so much alike, since they are not closely related. Their spotted plumage, similar to the dappled pattern of sunlight filtered through the tree canopy, likely helps camouflage both species. A 2018 study led by Gavin Leighton of the Cornell Lab of Ornithology points to another reason: feeder watch data showed that downies were very successful at dominating birds of similar or larger size, such as cardinals. The researchers believe downies use their hairy woodpecker-like appearance to pose as the bigger birds and scare off competitors at feeders.

Putting out suet in winter and leaving dead trees in your yard are good ways to attract hairy woodpeckers and observe their fascinating behavior.