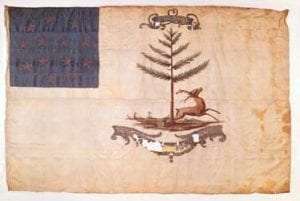 The Fraunces Tavern Museum has announced two new exhibitions, An American Emblem of Magnanimity and To the Beat of Their Own Drums: Regimental Flags of the American Revolution, set to open on Friday, April 2nd.

The Kathryn & Shelby Cullom Davis Educational Center for American History will house the exhibit To the Beat of Their Own Drums: American Regimental Flags of the Revolutionary War. This exhibition showcases a selection of flags flown by the regiments which made up the Continental Army and explores the meanings behind the symbols they used to adorn them. Flags depicting images from hornets to hand grenades were used to symbolize these soldiers’ bravery and courage.

Among the flags on display is the Bucks of America flag, a yellow and blue flag which the was carried by a Black company in Massachusetts. Also on display is the Third New York Regiment flag whose detailed images inspired the current design of the New York State flag. The Regiment was organized (for a third time) by Colonel Gansevoort after the Canadian expedition in 1776. The regiment was stationed at Fort Stanwix, and took part in the Sullivan Expedition, among other missions.

Other flags in the exhibit include the Bedford Minuteman Standard flag which bears the Latin phrase “Vince Aut Morire,” meaning “Conquer or Die.” Visitors will learn about the history and iconography behind the regimental flags of the diverse groups who fought for American Independence.

On display in the Adeline Moses Loeb Gallery, An American Emblem of Magnanimity examines the history of the Gadsden Flag and the role it continues to play in shaping the American identity.

The Fraunces Tavern Museum is located at 54 Pearl Street, New York. More information can be found on their website.

Illustration: the “Bucks of America” flag, in the collection of the Massachusetts Historical Society.