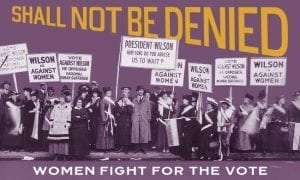 Women’s History Month takes place each March, highlighting the contributions of women to events in history and contemporary society.

To celebrate, the Library of Congress, National Archives and Records Administration, Smithsonian Institution, National Museum of American History have announced exhibits focused on commemorating and encouraging the study, observance and celebration of the vital role of women in American history.

Rightfully Hers: American Women and the Vote, an exhibit by the National Archives celebrates the 100th anniversary of the 19th Amendment, highlighting the relentless struggle of diverse activists throughout U.S. history to secure voting rights for all American women.

Hearts of Our People: Native Women Artists, an exhibit by the Smithsonian Institution’s Renwick Gallery features 81 artworks exploring the artistic achievements of Native women and establishes their rightful place in the art world. Women have long been the creative force behind Native American art, yet their individual contributions have been largely unrecognized, instead treated as anonymous representations of entire cultures.

To commemorate the 100th anniversary of the 19th Amendment, which recognized women’s right to vote, the National Museum of American History has announced Creating Icons: How We Remember Woman Suffrage. Highlighting women’s achievements in winning suffrage, it invites audiences to explore how the country celebrates milestones, what people as a nation remember, what (and who) has been forgotten or silenced over time, and how those exclusions helped create the cracks and fissures in a movement that continues to impact women’s politics and activism.

Rosa Parks: In her Own Words is an exhibit by the Library of Congress which showcases the Rosa Parks Collection, which came to the Library in 2014. The collection includes thousands of pages of Parks’ personal correspondence, letters from presidents, her writings from the time of the Montgomery Bus Boycott and about 2,500 photographs, as well as her Presidential Medal of Freedom and Congressional Gold Medal.

This list was provided by the The Matilda Joslyn Gage Foundation, which is dedicated to educating current and future generations about Gage’s work and its power to drive contemporary social change. To learn more about the Foundation and its work, visit their website.